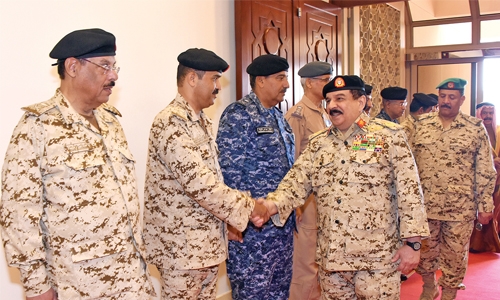 Manama : Bahrain’s preparations are in full swing to take part in a space expedition along with Russian cosmonauts to the International Space Station (ISS).

This came as His Majesty King Hamad bin Isa Al Khalifa visited the General Command of the Bahrain Defence Force (BDF) yesterday and reviewed the progress of a rehabilitation programme implemented to prepare RBAF officers for the Kingdom’s upcoming space programmes.

HM the King was briefed by the Royal Bahraini Air Force (RBAF) Commander of the rehabilitation programme implemented for the RBAF officers.

RBAF commander stressed that the “Bahraini pilots are eager to participate in the space trip”.

HM, the King valued highly the move and said, “This is within the framework of cooperation between the two friendly countries”.

Bahrain’s space ambitions got a big boost when HM the King established a first-of-its-type national authority for aerospace sciences back in 2014 for establishing a sound infrastructure for observing outer space and Earth. In 2016, Bahrain’s growth in the area was further boosted by the signing of a collaboration between the UAE Space Agency and the Bahraini National Space Science Agency.

Russian Astronauts, in a recent message, told HM the King that they are “hoping to see a Bahraini astronaut soon among them onboard International Space Station (ISS)”.

The statement, an audio and video message, was relayed from the International Space Station (ISS) by astronauts working with the Russian Space Agency - Roscosmos on the occasion of Bahrain’s National Days.

HM the King, in his reply, told the astronauts in ISS that Bahrain is “looking forward to seeing a Bahraini astronaut among the ISS crew soon.”

While reviewing plans to enhance the combat capability of the BDF units, HM King said that the training programmes adopted by BDF command “falls in line with the most modern training methods.”

HM King Hamad congratulated the graduates of the 12th batch of officer cadets – the Ahmed Al Fateh Brigade and wished them further success.

Lane to be closed on King Hamad Highway