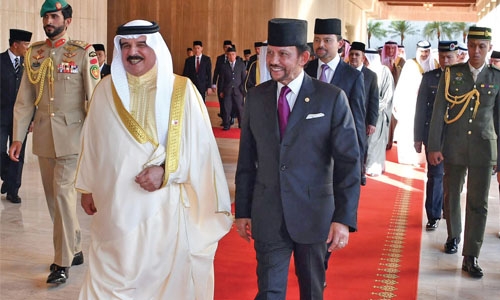 Bahrain to bolster ties with Brunei

Bandar Seri Begawan : His Majesty King Hamad bin Isa Al Khalifa who is on a state visit to Brunei at the invitation of Sultan Haji Hassanal Bolkiah arrived in the nation’s capital yesterday.

HM the King then headed to the Istana Nurul Iman where he was greeted by school students lined up on both sides of the streets welcoming the royal visit.

HM the King was accorded an official reception and the two national anthems were played, and twenty-one rounds were fired to salute him.

HM the King inspected the Guard of Honour lined up to salute him. He was welcomed by senior members of the royal family, ministers, diplomats accredited to Brunei.

The Sultan conferred on HM the King the Royal Family Order of Brunei in recognition of HM’s role in boosting relations between the two countries.