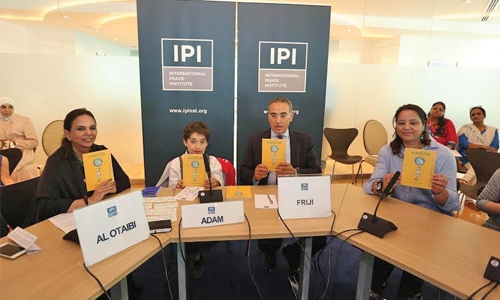 Manama : At a point, even when world-renowned writers are facing lack of sellable ideas and constant writers’ blocks, a juvenile author became the youngest guest at the International Peace Institute, Middle East & North Africa (IPI, MENA) in Manama on Thursday and spoke about his first book.

Nine-year old Adam Jade Kadia took the centrestage at a press conference titled “The Children for Peace,” where he discussed his book Hakeem the Adventurer and other future publications, with a number of children, parents and school officials.

The meeting also hosted a VIP guest from Mexico, Gloria Beléndez-Ramírez, who is a well-known ‘Ambassador for Happiness’ in her native country; Dr Shaikha May Al Otaibi, Chairperson of the Board of Trustees at Al-Bayan School; Adam’s mother Meriem Kadia; and world-renowned chef Guy Gateau (who provided take-home tasty goodies for the families and children).

Children from many schools in Bahrain, including The Indian School, St Christopher’s School, The Asian School and The British School of Bahrain (BSB), attended the get-together.

Nejib Friji, Director of IPI, MENA, an independent and international not-for-profit think tank dedicated to promoting the prevention and settlement of conflict, introduced Adam as a ‘person of the world’ with multicultural heritage including Moroccan, French and American.

“Adam is on his way to become a great writer. The message behind his story is to be open to other civilizations, religions and believe in diversity,” said Friji.

Shaikha May added, “Thank you for inviting me to this prestigious event to meet the young leaders. We are on the same planet as we are in the same house with our family – we learn from each other, all over the world.”

Adam, a Class four student at St Christopher’s School, started writing his book when he was six.

His story revolves around an orphan, Hakim, who travels to several countries, learning something new and making new friends.

He learns fishing from Egypt, experiences stunning souqs at Sudan, goes sailing in Tunisia and so on.

He finally ends up in Libya having a nice life telling stories to other orphans.

Following the introductory session at the press conference, an interactive session with the students was held.

Dana, a student from BSB asked about Adam’s inspiration to write the book, to which he replied, “I got inspired by some of my mother’s colleagues at her work. I am also inspired by British novelist and short story writer Roald Dahl.”

Indian school student Shidna delved deeper into the prospect of “peace” asking, “What can a student do to maintain peace?” Adam had a simple answer: “Stop the fights in playgrounds and make them friends.”

Replying to St. Christopher’s student Karim’s  question on Adam’s next book, the nine-year-old said it would be about a scientist, who goes to another universe.

Adam added that he had actually finished it too, but needed to do some editing.

When asked about the purpose of his life by Asian school’s Safna, he said, “My purpose is to try to spread peace everywhere and stop wars. I hope that everyone will like each other and see each other as equals. I want to be an IPI representative too.”

He added that he wanted to write more stories with happy endings.

Beléndez-Ramírez later encouraged more children to write, and said, “Writing from the heart means writing peace. I would like to encourage all of you to write your thoughts and write them from the heart, as Adam did. Happiness is only about being grateful.”

Friji concluded the conference saying he sees a number of ‘Adams and Eves’ in the gathering.  “You should all write from your heart, from your guts, for peace. You are humans, we are all equals. We live on this small village called The Planet,” he said.

The conference was IPI MENA’s first global leader’s series presentation hosting the ‘youngest pioneer’. Adam’s public message at this event seals him to become an international messenger of peace.