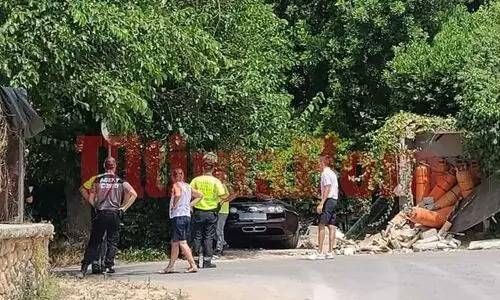 Manchester United forward legend Cristiano Ronaldo's super-car Bugatti Veyron suffered a major accident on Monday in the Spanish city of Majorca. The car, which costs around $2.1 million, was taken away in a blue tarpaulin following the crash.

According to Latin Times, Mr Ronaldo's sports car smashed into the entrance of a country house and a butane bottle booth. Initial reports have confirmed that it was an employee of the football superstar who was driving the car at the time of the accident and not Mr Ronaldo.

The driver allegedly lost control of the vehicle and glided into a wall in the residential estate of Sa Coma, Bunyola, Palma de Majorca, where Mr Ronaldo is currently spending the holiday with his family. The front of the million-dollar supercar is said to have been wrecked. Investigators have confirmed that no other vehicle was involved in the crash and the driver did not suffer any injuries.

Now, the police traffic services are investigating the sudden smash.

This comes after a US district judge in Las Vegas dismissed a rape lawsuit against the football superstar, castigating the legal team behind the complaint. According to reports, Judge Jennifer Dorsey threw out the case brought by Kathryn Mayorga of Nevada who alleged that she was assaulted by the Portuguese soccer star in a Las Vegas hotel room in 2009.

Ms Mayorga had claimed that Mr Ronaldo had paid her $375,000 in hush money at the time, however, in her lawsuit, she sought a further payment saying that her emotional trauma at the time did not allow her to participate in the mediation process.

But in the ruling released earlier this month, the judge accused Ms Mayorga's attorneys of "abuses and flagrant circumvention of the proper litigation process" and stated that as a result, Ms Mayroga loses her opportunity to pursue this case.