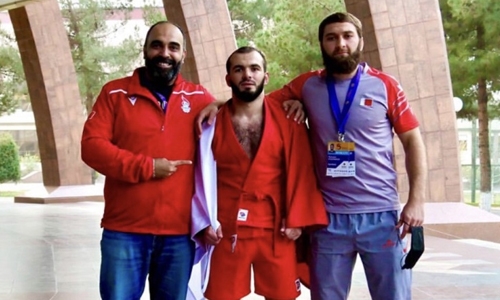 Ramadan Kudzhakov won the bronze medal in the World Sambo Championships, ranking Bahrain first in the Arab world, fifth in Asia and tenth in the world, in the final ranking of the national teams participating in the men's category held on November 8-14 in Tashkent.

Vice President of the General Sports Authority and Chairman of the Board of the Bahrain Council for Martial Games Shaikh Salman bin Mohammad Al Khalifa praised the Sambo national team achievement at the World Sambo Championships.

He expressed his pride in the national team, saying the achievement adds to the series of the Bahraini sambo accomplishments regionally and internationally.

He said that the team's win reflects His Majesty the King's support, the keenness of His Royal Highness the Crown Prince and Prime Minister and the efforts made by His Highness Shaikh Nasser bin Hamad Al Khalifa, Representative of HM the King for Humanitarian Work and Youth Affairs, Chairman of the Supreme Council for Youth and Sports, HH Shaikh Khalid bin Hamad Al Khalifa, First Deputy Chairman of the Supreme Council of Youth and Sport, President of the  General Sports Authority and Chairman of the Board of the Bahrain Olympic Committee, who contributed to boosting the level of sports and athletes and encouraging achievements that highlight Bahrain's sports successes.