; Philippines bans travel from Malaysia, Thailand due to Delta variant | THE DAILY TRIBUNE | KINGDOM OF BAHRAIN 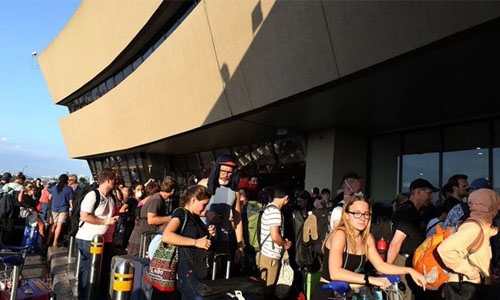 The Philippines on Friday said it would ban the entry of travellers from Malaysia and Thailand as part of efforts to contain the spread of the highly contagious Delta coronavirus variant.

The entry ban on Malaysia and Thailand takes effect on Sunday, and travellers who arrive from the two countries before then will have to spend 14 days in a quarantine facility, presidential spokesman Harry Roque said.

"This action is undertaken to prevent the further spread and community transmission of Covid-19 variants in the Philippines," he added.

The Philippines earlier banned the entry of travellers from Indonesia, India, Pakistan, Nepal, Sri Lanka, Bangladesh, Oman, and the United Arab Emirates due to the Delta variant, dpa reported.

The government also heightened restrictions in the capital region of Metro Manila and four provinces starting on Friday, amid the local transmission of the contagious variant, Roque said.

Indoor dining in restaurants is limited, while recreational and tourism facilities, as well as certain personal care services, are not allowed under the heightened restrictions in the five locations.

Clusters of Delta cases were detected in the southern region of Mindanao and the central province of Antique, while seven cases were reported in Metro Manila, the Department of Health said.

While warning that people can be infected with the Delta variant "in a click of a second," Health Undersecretary Maria Rosario Vergiere urged the public not to panic.

"We just need to focus, to be always aware and to follow safety protocols," she said. "We also need to get vaccinated now, that will give you protection against the Delta variant."

On Friday, the Department of Health reported 6,845 new Covid-19 cases, bringing the Philippines’ total caseload to 1,537,097. No new deaths were reported because of technical issues, so the death toll stood at 26,891, the department added.