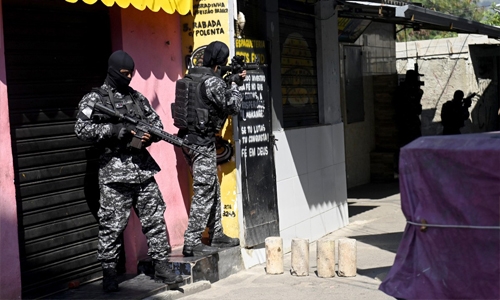 A policeman was among those killed in the early morning raid on Jacarezinho, on Rio’s north side, where residents awoke to explosions, heavy gunfire and helicopters overhead. Police confirmed the toll -- and investigators said it was the deadliest police operation in the history of Rio de Janeiro state.

Police identified the other 24 dead as “suspects” and said all protocols had been followed before officers opened fire, but rights groups and academics cried foul. “Who are the dead? Young black men.

That’s why the police talk about ‘24 suspects.’ Being a young, black favela resident automatically makes you a suspect to the police.

They just keep piling up bodies and saying, ‘They’re all criminals,’” said Silvia Ramos, head of the Security Observatory at Candido Mendes University. “Is this the public security policy we want? Shootouts, killings and police massacres?” she told AFP. Large groups of heavily armed police could be seen streaming into the favela as frightened residents tentatively went about their business once the gunfire died down, AFP journalists said.

Residents reported seeing corpses lying on the pavement in pools of blood, and numerous bodies being taken out in an armoured police vehicle, a local community leader told AFP, asking that his name not be published for safety reasons. At least two people were wounded when the subway car they were riding in was apparently caught in the crossfire during the operation, news site G1 reported.

TV network GloboNews showed aerial images of armed suspects fleeing from one residence to another in the densely packed neighbourhood during the raid, passing what looked like high-powered rifles from hand to hand. “Unfortunately, there were many clashes in the area. There is nothing to celebrate with this toll,” one police official told a press conference, adding that the officer killed was shot in the head. Rights groups and residents later inspected the houses targeted -- some had bloodstains and damage from the shootout.

Police said the operation targeted a gang suspected of recruiting children and teenagers for drug trafficking, robberies, assaults and murders.