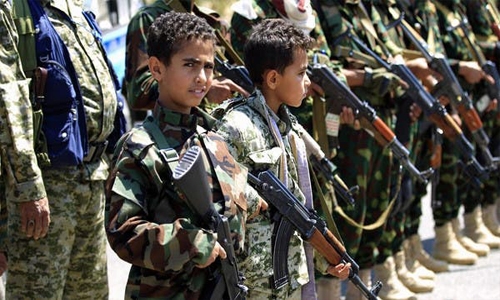 The Al-Arabiya report citing new video clips says young children reportedly from al-Assriyah Modern School in Sana’a act out a play where a boy is called to war and is killed in battle, supposedly becoming a martyr.

The boy’s mother in the act then hands his rifle to another child. “For the sake of pride, for the sake of dignity, we must sacrifice so that future generations live in pride and honour,” the boy says in the performance watched by other schoolchildren.

The Houthi militia has forcibly recruited 10,300 children in Yemen since 2014, according to a report released in February by The Euro-Mediterranean Human Rights Monitor and the SAM for Rights and Liberties.

The same report showed that the Iran-backed Houthis use schools and other educational centres to recruit minors into their ranks. The militia has also targeted the education system by disseminating propagandistic textbooks spreading hate against the group’s opponents as part of the school curriculum, according to a study published by the Institute for Monitoring Peace and Cultural Tolerance in School Education (IMPACT-SE).

Reading material for schoolchildren reportedly shows graphic images of deceased bodies and portrays the US as a “Greater Satan” responsible for the evils of the world.

Snow, snow everywhere; With that, they made a snowman