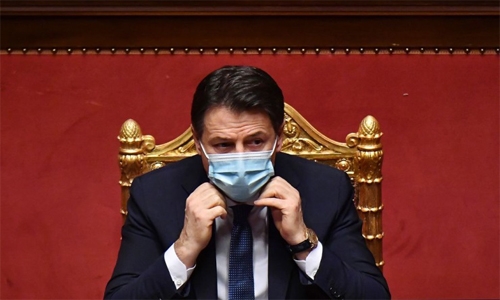 Italy's Prime Minister Giuseppe Conte is set to offer his resignation in a cabinet meeting on Tuesday, after his minority government only narrowly survived two votes of confidence last week.

Conte is set to convene the cabinet at 9 am (08:00 GMT), the government said late on Monday. He would then offer his resignation directly to President Sergio Mattarella.

The previous centre-left coalition hopes Conte could once again receive the mandate to form a new government, according to Italian media, Deutsche press agency (dpa) reported.

Conte's original coalition in Rome fell apart on January 13 with the departure of former prime minister Matteo Renzi's party Italia Viva, in a row over the use of EU aid money for recovery from the coronavirus pandemic.

Mattarella will play a decisive role in what comes next, if Conte does step down. Mattarella has the power to appoint a politician to form a new government. If no majorities are found he can call an early election.