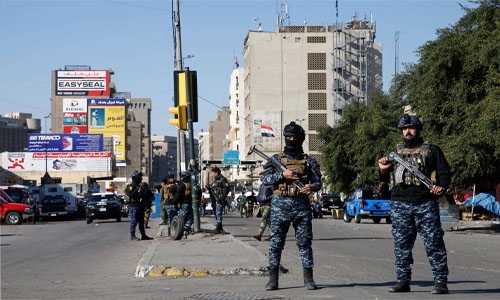 At least 11 fighters from Iraq’s state-sponsored Hashed Al Shaabi force were killed in an ambush by Daesh group north of the capital on Saturday, Hashed security sources said.

The militants used light weapons and the cover of darkness to target the Hashed east of Tikrit, the capital of Iraq’s Salahaddin province, two days after a twin suicide attack claimed by the group killed 32 people in Baghdad.

“Daesh launched an attack on the Hashed’s Brigade 22,” said one of the unit’s officers Abu Ali Al Maliki.

Maliki told AFP the brigade commander was among those killed before reinforcements from the federal police came to the unit’s aid.

There was no immediate claim of responsibility, but security sources interviewed by AFP blamed Daesh.

Iraq declared the group territorially defeated in late 2017 but has continued to battle extremist sleeper cells, mostly in the country’s mountainous and desert areas.

Local troops have been aided by a US-led coalition, which first intervened to help fight Daesh in 2014 and continues to provide training, surveillance and airstrikes in support of anti-militant operations.

The coalition has significantly drawn down its troop numbers over the past year, with the US shrinking its force from 5,200 to 2,500.

Local and Western sources have expressed concern over the readiness of Iraq’s security forces, who have been worn down by the spread of Covid-19, political infighting and corruption.

This week’s attacks may be more illustrative of those accumulated shortfalls than any significant Daesh comeback, experts have said.

Following the US-led invasion in 2003, Iraq’s security forces had to be effectively rebuilt from the ground up, relying heavily on training by foreign armies.

But with Covid-19 spreading fast through Iraq’s bases, coalition troops put a halt to all training operations.

Military sources and observers also cited political divisions within local security forces between units trained by the US and those — like the Hashed — who have received support from Iraq’s powerful neighbour Iran.

Navigating those tensions has been a major challenge for Prime Minister Mustafa Al Kadhemi, seen as being friendly with the US.

Kadhemi has relied heavily on the US-trained Counter-Terrorism Service for a range of missions, from hunting down Daesh cells to reigning in groups launching rockets at the US embassy in Baghdad.

To bring in more names and faces he trusts, Kadhemi ordered an overhaul of Iraq’s security leadership late Thursday, including a new federal police commander and chief of the elite Falcons Unit.

But he had to walk back some of those decisions within a day following political pressure.