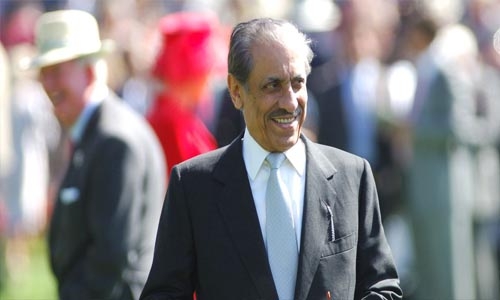 Khalid bin Abdullah, the Saudi prince who owned the Juddmonte Farms horse-racing operation which produced superstar thoroughbreds like Frankel and Dancing Brave, has died. He was 83.

The prince’s death was announced by the Juddmonte group on Tuesday. The organization did not give a cause of death, saying only that he died “peacefully.”

A passionate supporter of horse racing as a young man, Prince Khalid founded Juddmonte in 1980 and oversaw the breeding of more than 440 winners _ including 102 at top-tier Grade One level worldwide _ who carried his green, pink and white silks.

"He leaves a legacy that will stand the test of time. His contribution to the development of the thoroughbred will have long-lasting effects.''

Dancing Brave, bred in Kentucky, was his star horse in the 1980s, winning the Prix de l'Arc de Triomphe in 1986 as well as a string of major races in Britain that year including the 2,000 Guineas.

Frankel, named after the late American trainer Bobby Frankel, is in the conversation as the greatest ever racehorse after an unbeaten career in which he won 14 races from 2010-12.

Prince Khalid's most recent superstar was Enable, whose wins included the Prix de l'Arc de Triomphe in 2017 and '18 and the Breeders' Cup Turf in '18. She was ridden to all her major triumphs by Frankie Dettori.

The prince established Juddmonte bases in Britain, Ireland and the United States, with Newmarket's Banstead Manor Stud in England becoming the home of his top European stallions.

His successes were pioneering in the Middle East, with Sheikh Mohammed and Sheikh Hamdan Al Maktoum later becoming big names in horse racing out of the United Arab Emirates. Prince Khalid was a three-time champion owner in Britain.

Away from horse racing, he ran Mawarid Holding, a Riyadh-based private investment company.

With some Republicans on board, US House Democrats press forward on impeachment vote