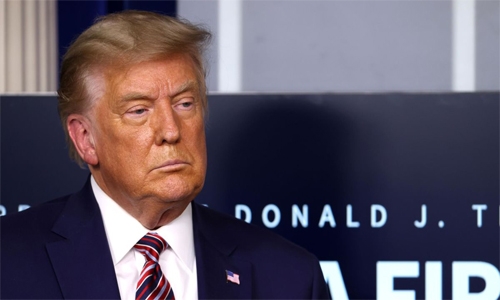 US President Donald Trump has called preparations to impeach him in US Congress “absolutely ridiculous” and said the movement was causing “tremendous anger”.

Trump, speaking yesterday as he boarded Marine One at the White House for a trip to Texas, called his likely impeachment in the House of Representatives a “continuation of the greatest witch hunt in the history of politics”.

The House will vote today to impeach Trump for inciting the deadly insurrection at the US Capitol last week, just seven days before the inauguration of President-elect Joe Biden.

Speaker Nancy Pelosi and her leadership team informed members on a private call on Monday they will need to return to the Capitol — for many, the first time since the January 6 attacks — on Tuesday night.

Impeachment is scheduled for consideration at 9 am today (6 pm Bahrain time), if Trump refuses to resign and Vice President Mike Pence won’t initiate other procedures to remove him.

Key members of the House Judiciary Committee introduced a single article of impeachment on Monday that has already gathered at least 218 cosponsors, according to a congressional aide involved in the process, meeting the majority needed for passage in the House.

It’ll be precisely one week from the day that a pro-Trump mob stormed the Capitol and sent lawmakers scrambling for cover, while Capitol Police struggled to hold off the violent crowd. Five people, including a Capitol Police officer, died as a result of the riots.

The episode sent Democrats into a furious rush to punish Trump for what they’ve described as “willful incitement of insurrection.”

“Because the timeframe is so short and the need is so immediate and an emergency, we will also proceed on a parallel path in terms of impeachment,” Majority Leader Steny Hoyer (D-Md.) told reporters. “Whether impeachment can pass the United States Senate is not the issue.”

The impeachment effort itself will dominate the final week of Trump’s presidency and is almost certain to come to a historic result: the first time in history a president has been impeached twice.

After the House vote, the articles are expected to move immediately to the Senate, where Majority Leader Mitch McConnell has indicated a trial — presided over by Supreme Court Chief Justice John Roberts — likely won’t start until the upper chamber returns on January 19.