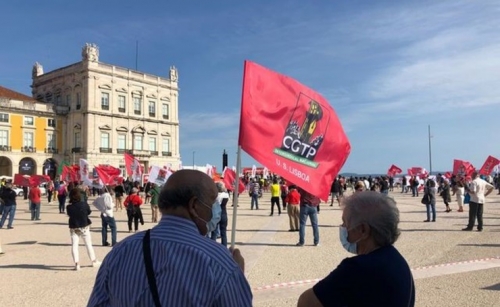 Thousands of workers gathered in cities and towns across Portugal on Saturday demanding higher wages and more government action to protect jobs threatened by the coronavirus pandemic.

During the peaceful protests, organized by Portugal’s biggest umbrella union, the CGTP, workers wearing masks, and keeping a safe distance urged the country’s Socialist government to raise the national minimum wage to 850 euros from the current 635 euros, the lowest in western Europe, Reuters reported.

“Workers’ rights are increasingly being stolen,” said Anabela Vogado, from trade union CESP, as she marched to Lisbon’s main square. “The fear of the pandemic cannot take our rights away.”

Unemployment in Portugal rose above 400,000 in August, according to the latest data, and is up more than a third in the same period last year.

In the southern Algarve region, which relies heavily on tourism, the number of people registered as unemployed soared 177% in August compared to a year ago.

Brad Pitt is ‘doubtful’ he will ever marry again