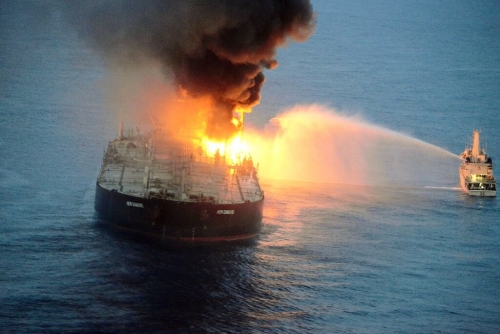 Tugboats battled into the night yesterday to stop a blazing oil tanker carrying 270,000 tonnes of crude from drifting towards the Sri Lankan coast. The fire on the Panamanian-registered New Diamond had been brought under control, according to the Indian coastguard.

But smoke was still pouring from the 330 metre (1,000 foot) long vessel after an engine-room explosion set off the emergency. The New Diamond was heading for the eastern Indian port of Paradip from Kuwait when it issued a distress signal 60 kilometres (37 miles) from Sri Lanka’s east coast