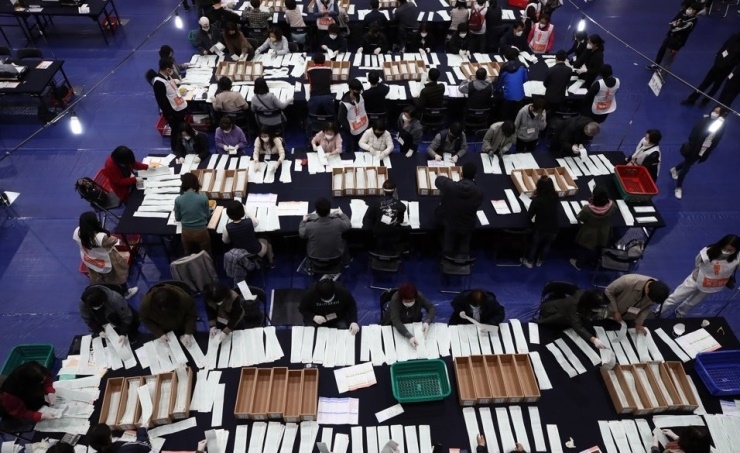 The result is set to give the party an upper hand in pushing ahead with its agenda as the country faces a virus pandemic and an economic slowdown.

In the quadrennial election, held as scheduled despite the coronavirus pandemic, the DP and its satellite Platform Party were estimated to have secured a combined 180 seats, or three-fifths of the total, in the 300-seat unicameral National Assembly, South Korean News Agency (Yonhap) reported.

This is nearly double the estimated 103 seats for the main opposition United Future Party UFP and its sister party Future Korea Party. It also marks the biggest majority a party has claimed since the country adopted the direct presidential election system in 1987.

Of the 253 directly contested seats, the DP won 163 seats, followed by the UFP with 84 seats, the liberal Justice Party with one seat, and independent candidates with five seats, according to the results tallied as of 10 a.m. when all votes were counted.

Of the 47 proportional representation slots, the parties affiliated with the UFP and the DP won 33.8 and 33.4 per cent of the votes, respectively. The Justice Party, the People's Party and the Open Democratic Party got 9.7 per cent, 6.8 per cent and 5.4 per cent, respectively.

This is expected to translate to 19 seats and 17 seats, respectively, for the UFP and DP's sister parties, five seats for the Justice Party, three for the People's Party and three for the Open Democratic Party.

The election watchdog is scheduled to hold a meeting at 5 p.m. where it will finalize the number of proportional seats.

The elections, held in the midst of South Korea's battle against COVID-19, was seen as a referendum on President Moon Jae-in, who has two more years in office.

Moon's approval rating fell to the 30 per cent level at one point last year, hit by a prolonged economic slowdown and a political scandal involving former Justice Minister Cho Kuk.

But the government's handling of the coronavirus crisis has changed public sentiment, as illustrated in recent polls in which Moon's approval rating shot up to over 50 per cent.

South Korea has reported a caseload of nearly 10,600 since its first infection on Jan. 20. It recorded fewer than 30 new virus cases for the third straight day Wednesday.

The DP's victory will enable Moon to manage state affairs stably during the rest of his single, five-year term. It will prop up Moon's reform initiatives, including the reform of the prosecution.

With 180 seats, the ruling bloc would be able to fast-track the passage of bills without support from other parties.

Observers say it would be capable of "doing everything" in parliament except constitutional revision, which requires at least 200 votes on the floor.

It would enable the DP to avoid political squabbles in pushing for key reform bills, unlike during the outgoing session of the National Assembly.

The UFP, meanwhile, suffered a painstaking blow, marking its third straight defeat in elections held since the 2017 ouster of conservative President Park Geun-Hye over a massive corruption scandal.

The conservative party failed to win over voters, though it highlighted the government's failure to prop up the economy and stressed the need to keep the DP in check.

Party leader Hwang Kyo-Ahn resigned from the party chairmanship to take responsibility for the UFP's defeat.

The general elections, one of the world's first elections to be held amid the coronavirus pandemic, was carried out with extra precautions.

The election watchdog prioritized safety to prevent potential exposure to the risk of infection.

Voters wearing face masks had their temperatures checked at the entrance. They disinfected their hands with sanitizers and put on plastic gloves before casting ballots. To keep social distancing rules, voters were advised to stand at least 1 meter apart from others.

Despite the virus, more than 29 million voters hit the polls, resulting in a provisional voter turnout of 66.2 per cent, the highest in 28 years. Turnout in early voting also hit a record 26.7 per cent.