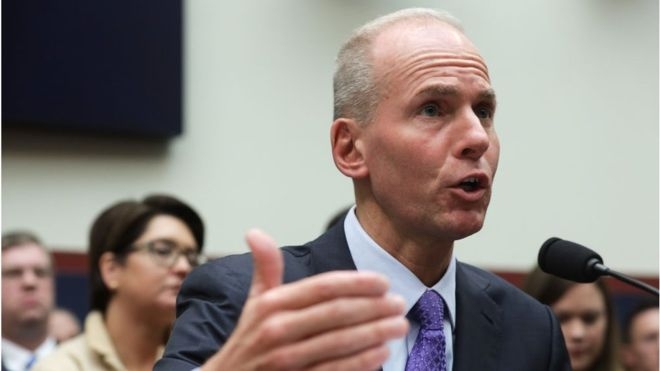 Boeing has announced that its chief executive, Dennis Muilenburg, is stepping down.

The move comes less than a week after the planemaker said it would temporarily halt production of its troubled 737 Max airliner in January.

Production of the jet had continued despite the model being grounded for nine months after two deadly crashes.

David Calhoun, its current chairman, will take over as chief executive and president from 13 January.

"The board of directors decided that a change in leadership was necessary to restore confidence in the company moving forward as it works to repair relationships with regulators, customers, and all other stakeholders," Boeing's statement said.

"Under the company's new leadership, Boeing will operate with a renewed commitment to full transparency, including effective and proactive communication with the FAA [Federal Aviation Authority], other global regulators and its customers."

Boeing's entire fleet of 737 Max planes has been grounded worldwide since March.

More than 300 people died when two 737 Max aircraft crashed in Indonesia and Ethiopia after reported problems with a new feature.

Boeing had been hoping to have the planes back in the air by the end of this year, but US regulators made it clear that they would not be certified to return to the skies that quickly.