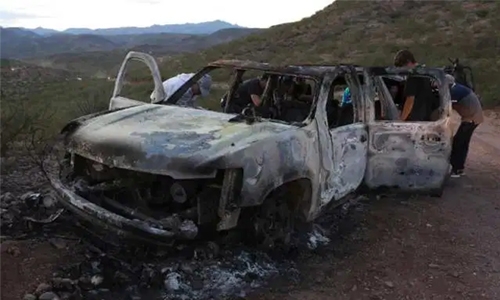 Killed American family may have been ‘bait’

The nine American women and children killed in northern Mexico were victims of a territorial dispute between an arm of the Sinaloa Cartel and a rival gang, officials said on Wednesday, and may have been used to lure one side into a firefight. Members of breakaway Mormon communities that settled in Mexico decades ago, the three families were ambushed as they drove along a dirt track in Sonora state, leading to US President Donald Trump urging Mexico and the United States to “wage war’ together on the drug cartels.

Accounts emerging of Monday morning’s slayings detailed the heroism of a surviving boy who walked for miles to get help for his siblings, and heavy gun battles in the remote hill area that lasted for hours into the night after the attack. “We were deliberately targeted, used as bait to lure one cartel against another,” said Lafe Langford, a cousin of some of the victims, who grew up in the same Mormon village.

Hitmen opened fire on the three mothers and 14 children travelling from a village in Sonora to meet with relatives in neighbouring Chihuahua state and Phoenix, Arizona. When the killers struck, the families were spread out along a 12-mile (20 km) stretch of road near the border of the two states, according to Mexican authorities and the families. As bullets began to pummel the first car, a white Chevrolet Suburban, Christina Marie Langford Johnson stepped out waving her arms to show that they were not gang members, according to a family statement based on reports from the surviving children.

Christina was shot dead. Her baby, Faith, survived the attack in a child seat that her mother appeared to have placed on the floor before she got out. Gunfire also ripped into a second white Suburban, carrying Dawna Langford and nine children, some two kilometres back, authorities said. Dawna and two sons were killed. A third car, 18 km behind, was shot up and burst into flames, killing Rhonita Miller and her four children.