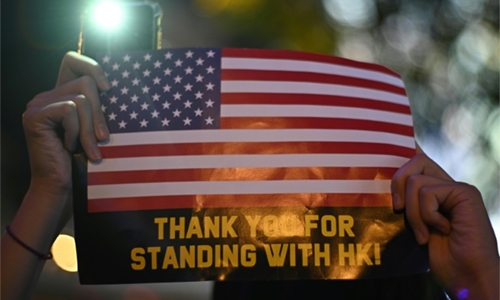 The US House of Representatives passed a bill Tuesday sought by pro-democracy protesters in Hong Kong that aims to defend civil rights in the semi-autonomous territory, prompting an angry response from China. The Hong Kong Human Rights and Democracy Act, which will now move to the Senate before it can become law, has drawn rare bipartisan support in a polarized Congress.

The law would end the Hong Kong-US special trading status unless the State Department certifies annually that city authorities are respecting human rights and the rule of law. China expressed “strong indignation” over the passing of the act, which also requires the US president to identify and sanction people who are responsible for the erosion of autonomy and serious abuses of human rights in Hong Kong.

“What Hong Kong faces is not the so-called human rights and democracy issue at all, but the issue of stopping violence, reinstating order and upholding the rule of law as soon as possible,” said foreign ministry spokesman Geng Shuang in a statement. Geng said the US should “stop meddling” and warned China would take “strong measures” to counter the proposed Hong Kong bill. The act will now move to a similar vote in the Senate before it can become law.

China has frequently accused “external forces” of fuelling weeks of unrest in the global financial hub. Millions have taken to the streets of Hong Kong, initially against a now-dropped bid by its leaders to allow extraditions to the authoritarian Chinese mainland.

Scientists shed light on how brains turn pain up or down