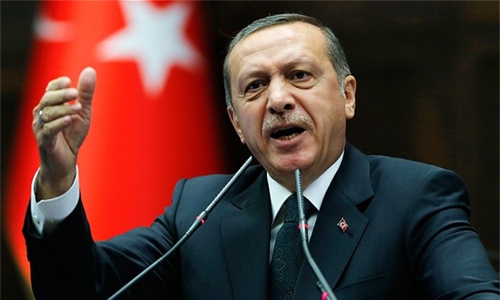 Turkish President Recep Tayyip Erdogan on Thursday hit out at EU measures to punish Ankara for drilling activities in the eastern Mediterranean and vowed to press ahead with gas search in the region.  Brussels unveiled last month measures including cutting 145.8 million euros ($164 million) in pre-accession financial funds to Turkey allocated for 2020.

The move came after Turkey defied warnings from the European Union and the United States to stop its drilling activities off Cyprus. “The EU which has announced so-called measures ... is not harming us but itself,” Erdogan told a televised press conference in the capital Ankara.

“We are continuing right now the exploration activities and will continue to do so with the same determination,” he said.  The discovery of huge gas reserves in the eastern Mediterranean has triggered a race to tap the region’s underwater resources and sparked a dispute between Turkey and Cyprus. Ankara has sent two drilling ships, as well as two seismic exploration ships to the region, whose security is ensured by the Turkish naval and air forces elements, the Turkish leader said.

Cyprus is divided between the internationally recognised Republic of Cyprus and a breakaway state set up after the 1974 Turkish invasion, following a coup sponsored by the military junta then ruling Greece. Turkey says the island’s resources should be equally shared between both communities.

EU member Cyprus in July rejected as “unacceptable” a Turkish Cypriot proposal to share offshore energy resources aimed at easing tensions. Erdogan on Thursday said no project that excludes Turkey or northern Cyprus in the eastern Mediterranean could be put into practice.

China to impose new tariffs on $75 billion of US imports: govt