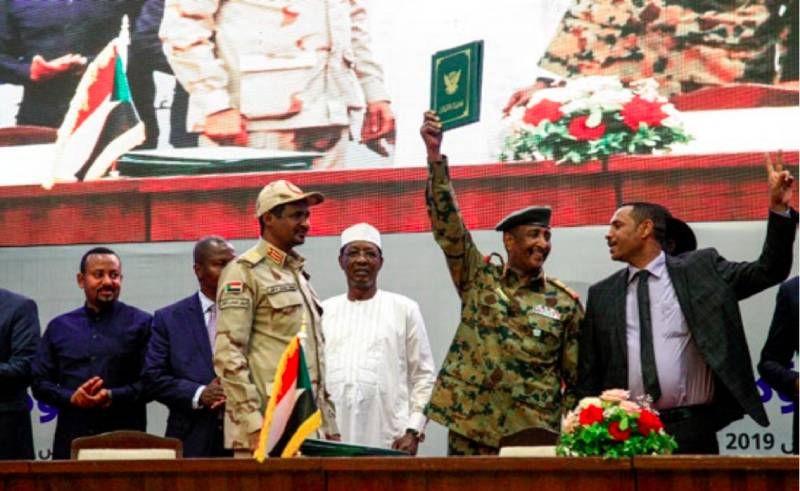 Sudan’s military council and protest leaders yesterday signed a hard-won “constitutional declaration” that paves the way for a transition to civilian rule.  The agreement was signed by Mohamed Hamdan Daglo, deputy chief of the military council, and Ahmed al-Rabie, representing the Alliance for Freedom and Change protest umbrella, a reporter said.

Heads of state, prime ministers and dignitaries from several countries -- including Ethiopia’s Prime Minister Abiy Ahmed and Egypt’s premier Mustafa Madbuli -- attended the ceremony in Khartoum, and the signing was met with applause.  The constitutional declaration builds on a political declaration that was agreed by the military and protesters on July 17.

It formalizes the creation of a transitional administration that will be guided by an 11-member sovereign council, comprised of six civilians and five military figures. The agreement follows nearly eight months of protests -- initially against longtime autocrat Omar al-Bashir, who fell in April and then against the military council that deposed him.

Talks between the protesters and the military were mediated by the African Union and Ethiopia, which brought the two sides together again even after a protest sit-in outside military headquarters was brutally dispersed by men in military fatigues on June 3.   Some 120 people were killed during that crackdown, according to doctors linked to the protesters.

The signing ceremony started with Sudan’s national anthem, followed by a reading of verses from the Koran and the Old Testament, while the words “Sudan’s joy” were emblazoned on banners.