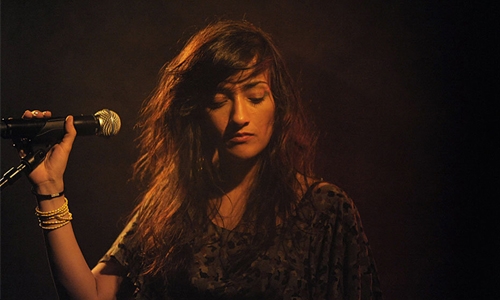 Moroccan singer Hindi Zahra recently bought her mesmerizing brand of music to the Louvre Abu Dhabi, where she performed as part of the Rain of Light festival on Friday. Arab News caught up with the singer, who has been compared the likes of Ella Fitzgerald and Patti Smith, before the show to find out more about her foot-tapping style of music and the album that her performances are based on, “Homeland.”

The Paris-based musician pays tribute to her home country of Morocco in the album, which features a mix of English and Amazigh-language tracks. “It is the country that gave me everything,” the artist, whose stage name is simply her real name inverted, told Arab News. “It gave me… mixed culture — African culture, Mediterranean culture. My openness toward other cultures comes from my Moroccan roots,” she added.

Hindi was raised on a steady diet of jazz, rock and blues, which she said her uncles collected due to a familial interest in international music. That could be part of the reason why she is so comfortable performing in multiple languages. “I am comfortable with both (English and Amazigh), but because I… grew up with a lot of Afro-American music, it was really natural for me to improvise in English.”

In addition to a clear appreciation and understanding of Western jazz and rock music, Hindi spoke fondly about a legendary Egyptian artist whom she said has inspired her. Abdel Halim Hafez, who worked during the country’s golden age of entertainment between the 1950s to 70s, played an important role in shaping Hindi’s own style. “I love the way he delivered feelings through music,” she said of the late opera singer who died in 1977.

Imbued with an appreciation for a wide range of international styles, Hindi released her first album when she was 30 years old — even though she says she was ready 10 years earlier. She waited a decade so she could produce music on her own terms, under her own label, she said.

“I am shocked about the condition of women in the industry, so it was very important for me to be free and to own my music so nobody owns me.” After all this, her only hope when it comes to performing is “that (the audience) will dance,” she said. “If I see them enjoying (the) music to the point that they dance, this is the most important.”

LEGO McLaren Senna made with half a million plastic bricks