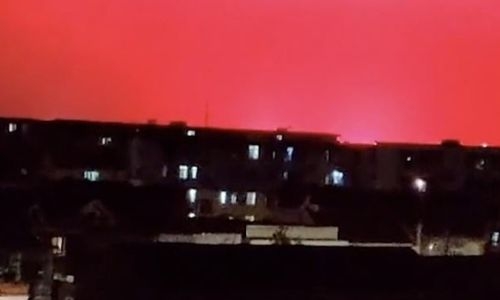 The red sky, that appeared in Zhoushan, a city in East China's Zhejiang, was caused by the refraction and scattering of light, most likely from ship lights in the port, local media reported. The rare phenomenon of a red sky that appeared in Zhoushan on Saturday, shown in the videos and photos taken by many local residents, became one of the top trending topics on China's Twitter-like social media, Sina Weibo, attracting more than 150 million views as of Sunday night.

"I have never seen anything like this before. It really amazes me that the sky can even turn red," said one of the video makers. It was foggy and cloudy in Zhoushan on Saturday and it was drizzling at the time of the red sky, which might have been caused by the reflection of light from the low-level clouds, a staff of the Zhoushan Meteorological Bureau explained.

"When weather conditions are good, more water in the atmosphere forms aerosols which refract and scatter the light of fishing boats and create the red sky seen by the public," said the staff of the meteorological bureau.

Some netizens pointed to a red sky that appeared for nine days in many countries in 1770, which Japanese scientists claimed in an academic article in 2017 that it was caused by a massive solar activity. An expert from the space physics research team of the China University of Geosciences in Wuhan told media that solar and geomagnetic activity on Saturday was calm and there were no significant anomalies in solar activity, according to the observation records, which basically ruled out the possibility that the geomagnetic and solar activity turned the sky red in Zhoushan.