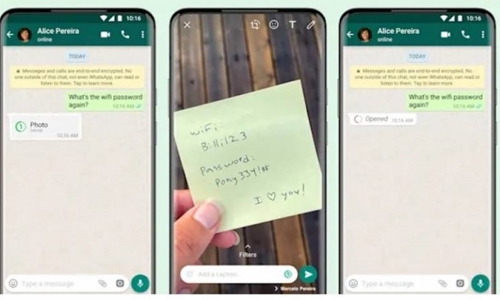 WhatsApp is now letting users around the world send photos that can only be viewed once by any recipients.

The Facebook-owned messenger thinks this will be useful, for example, if you want to share confidential information such as wi-fi login details, but users will like to come up with many other uses for sending sensitive photos, dpa reports.

The sender must select the "view once" option each time, meaning you can't set all photos to delete after sending.

Any photos you do send with the view once option can then neither be viewed a second time by the recipient nor forwarded or saved.

However, this still isn't a foolproof and entirely secure means of sending sensitive photos, as the receiver will still be able to take a screenshot or photograph the screen with another device, as WhatsApp notes.

If the option has been rolled out in your app, you'll notice a new button with digit 1 in it when you're about to send a photo. Once you've sent a photo with this method, you yourself can't see it. Instead, you see "Photo" with a 1 beside it to show that a photo was sent.

If a user reports a view once photo as inappropriate, then WhatsApp can also access it. If a photo is not opened within 14 days, it disappears from the chat.

WhatsApp also expects the function to help save space on people's phones. "While taking photos or videos on our phones has become such a big part of our lives, not everything we share needs to become a permanent digital record," the company said in a blog post

"On many phones, simply taking a photo means it will take up space in your camera roll forever."

WhatsApp had already announced the new feature weeks ago after the uproar surrounding its new terms of use. The messenger service was embroiled in controversy after data protectionists warned that the new terms of use were laying the groundwork for greater data sharing with Facebook. WhatsApp rejects this.