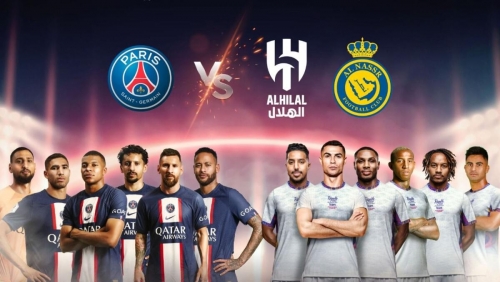 The celebrated rivalry between Lionel Messi and Cristiano Ronaldo has been dominating the football scene for more than a decade, and the world on Thursday (January 19) will get the chance to see another contest between the Portuguese and Argentine.

The Portuguese forward-led Saudi all-star team, comprising players from Al Nassr and Al Hilal clubs, will clash with Paris Saint Germain in an exhibition match at the King Fahd Stadium in Riyadh.

Tickets are sold out for the highly anticipated showdown. And to top it all, today, officials announced that a Saudi real estate businessman won a ticket to see the game after bidding a whopping 10 million riyals (Dh9.78 million) at auction.

But fret not, as you don't have to shell out millions to watch the legends. Here's how you can tune in to this exciting fixture.

BeIN Sports Network holds the rights to show the game live across their channels worldwide.

Their free-to-air channel and Sports 2 in Arabic will broadcast the live studio coverage before the match at 7pm, while the English coverage will start half an hour later on beIN Sports English 1.

The network will also telecast the match across the Mena region.

PSG will also livestream the game on the club website, as it is part of their annual Middle East tour. Match commentary will be in three languages (English, French and Mandarin) based on choice and location.

PSG: The exhibition game will also feature other key players from the team such as Kylian Mbappe, Sergio Ramos and Neymar, while Saudi internationals Salem Al-Dawsari, who scored in the shock group-stage win over Argentina, and Saud Abdulhamid will play too.

The Saudi Riyadh Season select team will be led by Argentinian coach Marcelo Gallardo in an exhibition match against French champions Paris Saint-Germain.