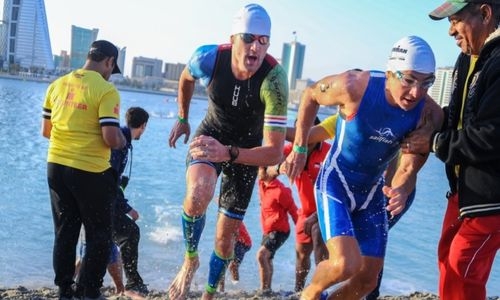 Representative of His Majesty the King for Humanitarian Work and Youth Affairs His Highness Shaikh Nasser bin Hamad Al Khalifa welcomed the participants in the Ironman 70.3 Middle East Championship, which will be held in Bahrain on December 7-9.

The number of participants reached 1061 male and female representing 77 countries.

His Highness affirmed that Ironman Championship represents an important event in the Kingdom and sheds light on Bahrain’s continuous successes in organizing major sport events, praising the efforts of the organizing committee and its keenness to provide all success factors for the participants to record a new achievement for Bahrain.

HH Shaikh Nasser expressed his appreciation to all government ministries, companies and private institutions for their great cooperation with the Organizing Committee and their keenness to make efforts to produce a distinguished race that reflects the high capabilities of the Kingdom in its administrative and technical resources.