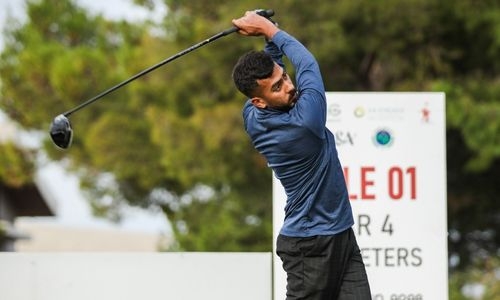 Bahrain’s Ahmed Al Zayed maintained his top 10 position in seventh overall after the third and penultimate round of play yesterday in the 41st Pan Arab Men Golf Championship, being held at La Cigale Tabarka Golf course in Tunisia.

Al Zayed was the national team’s top-scoring golfer over yesterday’s 18 holes, carding a four-over-par 76 to bring his three-day total to a 16-over 232.

His other two scores from the first two days were 81 and 75, and he now heads into the final round as the top Bahraini hopeful.

Teammate Fahad Al Hakam also stayed in the top 10 with the last 18 holes to go today. Al Hakam played a six-over-par 78 yesterday to go to 18-over 234— two shots behind Al Zayed—after 54 holes.

Al Hakam has been consistent over the course of the competition, with his totals on the first two days being 77 and 79.

His score yesterday was sixth-best amongst the field of 21 who took to the fairways. Meanwhile, Bahrainis Khalifa Al Merisi and Khalifa Duaij Al Kaabi were not far behind, both taking places in the top 20.

Al Merisi was ranked 12th after carding an eight-over-par 80 yesterday to go to 23-over-par 239 after three rounds, while Al Kaabi was 17th after playing a score of 81 yesterday to head into today’s final day 32-overpar 248. Their outings on day three were eighth and ninth-best, respectively.

Leading the field with the concluding 18 holes to play is Elyas Barhoumi from Tunisia with a three-under-par total of 213 over after 54 holes. Saaoud Abdallah Al Sherif from Saudi is second on an even-par 216 score, while Issa Abu El Ela from Egypt is third with a four-over-par 220.

Dean Naeem (221) from Egypt, Baha Boulakmine (225) from Tunisia and Saleh Ali Al Kaabi (227) from Qatar are all ahead of Al Zayed on the leaderboard.

Completing the top 10 behind Al Zayed in eighth is Faycal Mohammad Al Salhab (234) from Saudi Arabia, while behind Al Hakam in 10th is Aziz Dardouri (237) from Tunisia.

All four of Bahrain’s golfers are back in action for today’s finale.

The Arab championship is being played at the individual and team levels. In the teams’ competition, only each nation’s three lowest scores count on each day.