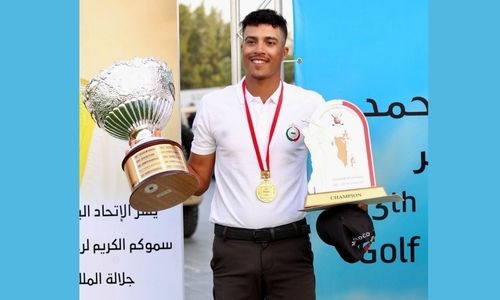 The 14th edition of the King Hamad Trophy golf championship takes place this weekend from Thursday to Saturday at The Royal Golf Club.

Ninety professional and amateur golfers are taking part in the prestigious 54-hole, strokeplay event, which is being organised by the Bahrain Golf Association.

This year’s competition has attracted participants from around the world, specifically the United Kingdom. A total of 17 countries are being represented, and the tournament will be welcoming players from Japan for the first time.

The field is set to be headed by defending champion Ahmed Marjan from Morocco and twotime former champion Luke Joy, who will be joined by fellow-Briton and MENA Tour winner Tom Sloman.

Following the first two rounds of play, the field will be reduced to 45 players plus ties for the last 18 holes along The Royal Golf Club’s Montgomerie championship course.

The tournament’s main sponsor is Batelco.

Silver sponsors are Bahrain Economic Development Board, BBK, Security Solutions and GPIC. Aside from Marjan and Joy, other past winners of the King Hamad Trophy include Andrew Marshall, who has won it a record five times, Graham Spring, David Park, Yasin Ali, Jamie Elson and Rayhan Thomas.

Marshall and Joy are the only multiple winners in the tournament. Marjan secured last year’s title after carding a one-under-par 71 over the final 18 holes to finish the three-round event with a seven-under-par total of 209.

He headed into the last day as joint-leader.

Marjan emerged victorious by two shots ahead of runner-up Jesper Alm of Sweden, who played an even-par final round to finish five-under 211.

Briton Louis Campbell, who shared the top of the leaderboard with Marjan after the second round, came third with a three-day tally of three-under 213.