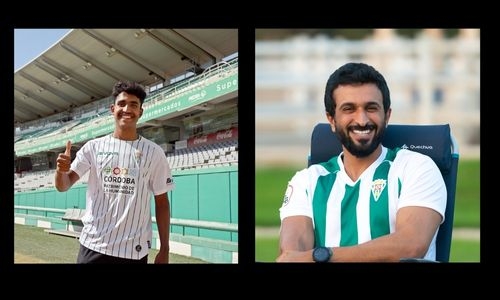 In line with the vision of HH Shaikh Nasser bin Hamad Al Khalifa, Representative of HM the King for Humanitarian Works, and as part of the keenness to support Bahraini players, Spanish side Cordoba has signed Hisham Al Khulaifat who plays for the Bahraini National Youth team. Khulaifat will be the first Bahraini to join a Spanish club and showcase his skills in the Spanish stadiums. The move comes as the team put together a series of positive results in the past period thanks to the backing of HH Shaikh Nasser.

His Highness affirmed that the Kingdom of Bahrain is heading towards upgrading its players’ skills across all sports in line with its vision that involves making successful generations composed of young individuals who have high technical abilities and capable of accomplishing top honours and earning high positions at the regional and international levels. “As part of our belief in young Bahraini talents, we witness today the transfer of a young Bahraini player, namely Hisham Al Khulaifat to the youth team of Cordoba. He will ply his trade for them this season.

It will be a unique experience for him as he will be able to show his skills in the Spanish stadiums and compete against great players who have outstanding skills and achievements in addition to participating in advanced professional training sessions,” HH Shaikh Nasser said. Hisham was hand picked after capturing the attention during the last visit of Cordoba to Bahrain. He managed to pass the technical tests which took place in Spain in August. Commenting on this, Khulaifat expressed utmost thanks and appreciation to HH Shaikh Nasser for his constant support to the Bahraini players. “Joining cordoba is a huge honour for me, a dream come true. All my life I’ve wanted to play abroad and experience the life of a professional football player and Cordoba CF have helped me achieve that.

I hope to play for the first team one day and make the supporters and Bahrain proud!” Khulaifat currently plays with Bahrain’s under 20 national team and aims to play with the first team. “To get the call-up to the first team won’t be easy but I’m willing to work and sacrifice a lot so we will see what happens in the future.” Khulaifat began playing football at the age of four after joining Arsenal academy in Bahrain. He later trained under another academy called tekkers Bahrain until he was 13 after which he played for Al Najma club until 2021. Cordoba currently plays in the third tier of the Spanish football league system.