We believed 100 per cent: Riffa’s Ashoor | THE DAILY TRIBUNE | KINGDOM OF BAHRAIN 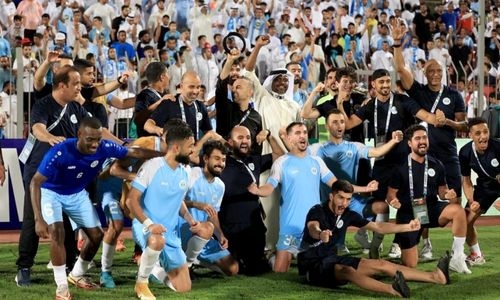 We believed 100 per cent: Riffa’s Ashoor

Riffa head coach Ali Ashoor said that his team’s resolve never wavered in their nail-biting 5-4 penalty shootout victory over East Riffa on Tuesday night that took them to the West Zone final of the AFC Cup 2022. The Bahrain champions were tested by their domestic neighbours and they were able to scrape past in thrilling fashion, with goalkeeper Abdulkarim Fardan making the clinching save to end a gruelling battle.

“We made changes with the hope of scoring, but even when that didn’t happen in 90 minutes, we continued to believe 100 per cent,” Ashoor said in his post-match Press conference. “The players, the coaching staff, the fans, everyone believed wholeheartedly that we would eventually score and qualify.” Ali Haram put Riffa ahead in extra-time but only three minutes later East Riffa equalised through Abdulla Shallal, sending the contest to the spot kicks.

“We got our goal in extra time, but then we had a lapse of concentration which resulted in them scoring,” Ashoor recalled. The Bahraini tactician added that his team was well-prepared for the shootout, particularly Fardan, who “did his homework” on their opposition.

“I told the players that I don’t believe penalty shootouts are about luck—I believe they are about talent, concentration and confidence,” Ashoor said. “All the players did well and Abdulkarim did his homework on the East Riffa players with the goalkeeping coach, and thank God we were rewarded for our efforts with the win.” East Riffa head coach Florin Motroc was all praise for his side despite not winning the game.

“I am very proud of my players,” said the Romanian in his own Press conference. “They were amazing, having given more than 100 per cent. “I finished the game with a lot of physical problems but the players showed desire, amazing discipline. I am very sad as by losing, we made our fans sad but the players tried their best.” Riffa move on to play Al Seeb of Oman in the West Zone final, which is scheduled to be held on October 4. Seeb clinched their berth after defeating Al Arabi of Kuwait 2-1 in extra-time.