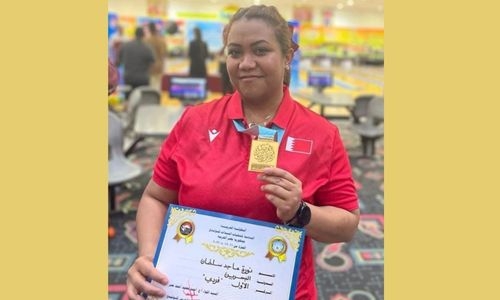 Bahrain’s Noora Sultan was crowned ladies’ singles champion at the 10th Arab Men’s and sixth Ladies’ Bowling Championship 2022, currently being held in Egypt. Noora clinched her gold medal after finishing as the topranked competitor from a field of 28, who played six games. Noora finished with a total of 1,211 pins for a 201.83 average.

Meanwhile, in the men’s singles, Bahrainis Ahmed Fareed and Abdulla Abdulkarim narrowly missed out on a podium finish. They ranked fourth and fifth, respectively, with Fareed going just eight pins shy of claiming the bronze medal. He completed his six-game campaign with a 1,367 total for a 227.83 average in fourth, while Abdulkarim had marks of 1,364 and 227.33. Bahrain had four others in the field of 60 players competing.

The championship continues until August 19, and there is also competition in the doubles, trios, teams and all events. The Bahraini delegation in Egypt is headed by Bahrain Bowling Association treasurer Rashid Al Bouainain.