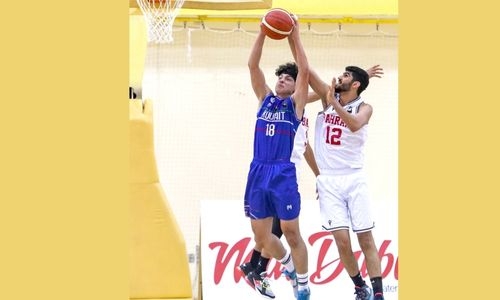 The nationals took a slim 40-35 lead heading into the final quarter and maintained their advantage midway through. The Kuwaitis then cut their deficit to just three, 43-46, with four minutes to play and appeared set to make one final push.

But Elias Younis Abdulla buried a crucial three-pointer with two-and-a-half minutes remaining to extend the Bahrainis’ lead to six, and that sparked a decisive 9-2 run to close out the game and secure the podium finish.

Clinching the gold medals in the tournament were Qatar, who beat Saudi Arabia 75-51 in last night’s final played at the same venue. The winners were dominant in the game, leading by as many as 27 points. Both the Qataris and Saudis also officially secured their places in the FIBA U18 Asian Championship 2022 as GBA representatives. The competition will be taking place in Tehran from August 21 to 28. The top three teams were presented their respective trophies and medals in an awarding ceremony yesterday that followed the title-decider. Bahrain national team officials were on hand for the prize-giving.

In Bahrain’s win over Kuwait, the youth nationals held a slim 14-11 lead at the end of the first quarter which their opponents were able to cut down to a 26-24 advantage at the half. The Kuwaitis were able to tie the proceedings early in the third but the Bahrainis recovered and took their five-point advantage into the fourth quarter. There, they did well to extend the gap until Kuwait narrowed it down to three, but that then set the stage for their game-clinching rally in the closing minutes.

The nationals were able to post their biggest lead of the game of 11 points during that span. Skipper Abbas Albasri was the national team’s leading scorer with 15 points, while Omran Abdulla Akbar added 13 as their only other player in double figures. Nasser Al Anzoor chipped in with eight points in the win, while Mahdi Ali Khalifa Almusalli had six.

Kuwait, who are coached by veteran Bahraini tactician Salman Ramadhan, were paced by the 18 points of Adel Alsaied. Bahrain’s win yesterday halted a fourgame losing skid that dated back to the preliminary round. They had earlier opened the tournament with back-to-back wins over hosts UAE and Oman, but then lost three in a row to Qatar, Kuwait and Saudi Arabia to end the tournament’s opening stage. The Bahrainis then lost in the semi-finals to the Qataris, but were able to bounce back against Kuwait.