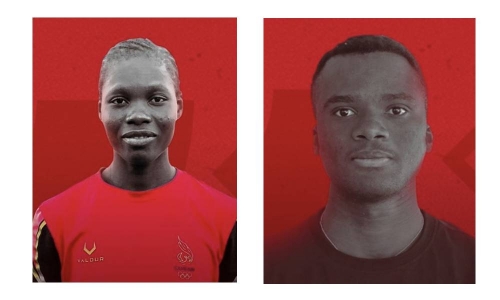 Bahrainis Zenab Moussa Ali Mahamat and Yusuf Ali Abbas powered into the next round of their respective events yesterday at the World Athletics U20 Championships 2022, currently being held in Cali, Colombia.

Zenab won the first of five heats in the opening phase of the women’s 400 metres to make it through to the semi-finals, which are scheduled for early tomorrow morning, Bahrain time. Also making it through in his race was Yusuf Ali Abbas in the men’s 400m.

Abbas advanced after finishing as the runner-up in the second of five first round heats. His semi-final is also scheduled for early tomorrow morning, at 1.25am, Bahrain time. In Zenab’s race, the 18-year-old put in a fantastic performance and had a comfortable lead at the finish.

She won her heat in 52.87 seconds, which was a new personal best. Precious Molepo from South African was second in 53.50s, Ella Clayton from Canada third in 53.69s and Mia Powell from New Zealand fourth in 54.04s.

All of them were automatic qualifiers. Zenab was the sixth-fastest qualifier amongst the 24 athletes who made it through to the semis. Yemi Mary John from Great Britain was the fastest from the first round. She won heat three in a time of 52.42s.

On the distaff, 19-year-old Abbas put in a strong showing in his men’s 400m race. He was in the lead heading around the final bend, but was overtaken towards the end by race winner Lythe Pillay of South Africa.

Abbas had to settle for second place but still advanced with a time of 46.21s. Pillay won in 46.02s, while Delano Kennedy from Jamaica was third in 46.24s and Elkanah Kiprotich Chemelili of Kenya fourth in 46.69s to also go through as automatic qualifiers.

Abbas was the second-fastest among the 24 athletes to march on past the first round. Bahraini sprinter Layla Kamal was also in action last night in the first round heats of the women’s 100m. The 15-year-old was running in the fifth of seven heats, but could not advance after finishing seventh in the race in 12.13s.

Shawnti Jackson of the US won in 11.28s. Earlier yesterday, Bahrain’s Abdikani Mohamed Hamid finished 10th in the men’s 5,000m final while the 4x400m mixed relay team were disqualified from their event.

In the 5,000m, 17-year-old Hamid finished his race in 14 minutes 22.32 seconds. Addisu Yiune from Ethiopia won the gold medal in 14:03.05, while Merhawi Mebrahtu and Habtom Samuel, both from Eritrea, were the silver and bronze-medallists, respectively.