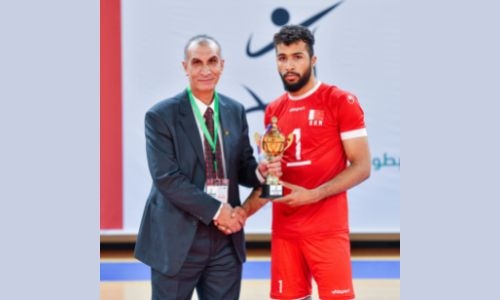 Two of Bahrain’s top junior national volleyball team players were among the individual awardees at the end of the first West Asian Men’s U20 Volleyball Championship, which came to a close in Qatif, Saudi Arabia late on Sunday night.

The Bahrainis finished as tournament silver-medallists after losing to hosts Saudi in three sets in the title-deciding match. To add to their final classification as runners-up, Bahrain talents Hashem Issa and Hussain Ali each took home trophies for their performances in the competition. Issa was named the Best Hitter, while Ali was selected as the Best Setter.

Both youngsters were presented their respective accolades during the official awarding ceremony that was held after the final. Bahrain’s junior national team now have their sights set on the 21st Asian Men’s U20 Volleyball Championship, which will be held in the Kingdom later this month.

This year’s Asian under-20 event will be the third time Bahrain is hosting. The Kingdom previously also staged the tournament in 2014 and 2018.