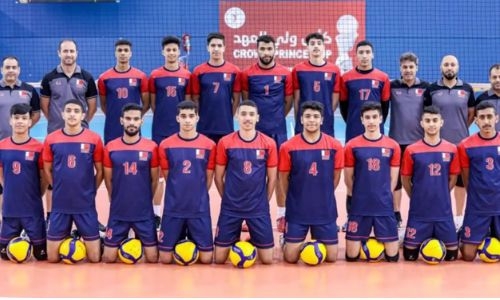 Bahrainis preparing for West Asian and Asian championships, taking place over next two months. Bahrain’s junior national volleyball team are set to leave for Slovenia today where they will hold a training camp over the next week-and-a-half in preparation for their upcoming major competitions.

The Bahrainis are set to compete in the West Asian Junior Volleyball Championship, to be held in Saudi Arabia, from July 20 to 30.

They will then also be flying the Kingdom’s flag in the 21st Asian Men’s U20 Volleyball Championship, which will be hosted by Bahrain from August 22 to 29. The team is coached by Tunisian tactician Saber Abdulwahed, and they will be travelling for their camp with a 12-player squad that includes Hussain Ali, Redha Matrook, Ali Al Bosta, Hassan Al Warqa, Sayed Hashem Issa, Ali Hussain, Ali Habib, Sadeq Marhoon, Sayed Ahmed Murtadha, Hussain Abdulredha, Hassan Aliwi and Abbas Ihsan.

The camp is scheduled to continue until July 7. For the Asian championship, Bahrain are one of 18 nations from across the continent participating. They have been drawn in Pool A for the competition’s preliminary round alongside Hong Kong and Saudi Arabia.