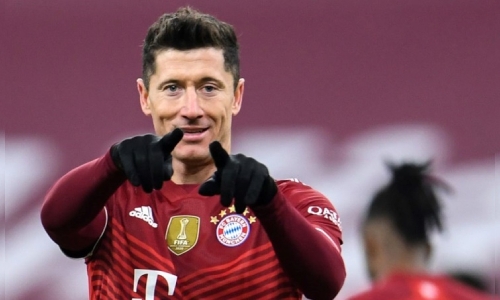 Bayern Munich and Poland striker Robert Lewandowski were named the best men's player in 2021 at a FIFA awards ceremony on Monday.

The Pole broke Gerd Muller's long-standing single-season Bundesliga record with an unprecedented haul of 41 goals. In all competitions, he scored 48 goals in 40 games for Bayern in the 2020-21 season.

"Thank you very much, it is a great honour," Lewandowski said as he received the trophy from Bayern chief Oliver Kahn, coach Julian Nagelsmann and board member sport Hasan Salihamidzic.

"Everything that happened last year, the Bundesliga record - I would never have dared to dream about that."

At the ceremony, Thomas Tuchel was honoured as best coach after his Champions League triumph with Chelsea.

"It was a pretty normal day so far at the training centre, I've just come from training because we have a game (on Tuesday), but now you opened the envelope and said my name, it's pretty surreal," the German coach said.

"I'm overwhelmed, I feel a bit uncomfortable actually. I enjoy the journey and I enjoy the club, it's a good fit."

On the women's side, Alexia Putellas of Barcelona took the award for best player and Chelsea's Emma Hayes for best coach.

Édouard Mendy and Christiane Endler were named best men's and women's goalkeepers respectively, while the Denmark national team, medics and coaching staff received the Fairplay Award for their heroic response after Christian Eriksen collapsed during Denmark’s match against Finland at the Euro 2020.

Due to the coronavirus pandemic, the ceremony was held partially online, with only a few guests and FIFA officials, including President Gianni Infantino, at the event in Zurich.

All nominated players and coaches participated via video link.