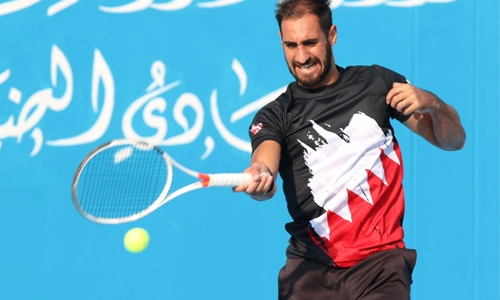 Bahrain’s Yousef Qaed was eliminated from the qualifying round of the ATP Tennis Challenger, which got underway last night at the Public Security’s officer's club courts in Gudaybia.

Entering the competition as a wild card, Qaed lost his qualifying match to Michail Pervolarakis of Greece in straight sets 4-6, 0-6, and with it an early exit from this international tournament.

Making his debut at this world-class tennis competition, Qaed headed into his qualifying match against his Greek opponent hoping to book a berth in the main draw.

However, the prominent Bahraini faced a tough challenge from a more influential Pervolarakis, who proved the stronger side in the game with precious, notable stamina and skills, to secure the victory and a place in the main draw, scheduled for tomorrow.

In another match, Saudi Arabia’s Ammar Al Hogbani bowed out of the competition after a similar straight-sets 1-6, 2-6 defeat to Germany’s Johannes Haerteis.

Omar Ahmed, another entrant from Saudi Arabia, was unable to advance into the tournament’s main draw, having lost his qualifying contest to Khumoyun Sultanov of Uzbekistan 3-6, 2-6.

But the cream of yesterday’s action was a come-from-behind victory for Tobias, who overcame an unstable start to edge Ukraine’s Eric Vanshelboim 4-6, 6-3, 6-0.

In yesterday’s other highlight, Neuchrist created the first upset score in the competition, sending eighth seed Ivan Gakhov Russia out of the tournament with a surprising hard-fought 7-6 [6], 6-4 victory.

Meanwhile, 10 matches will conclude the second and last day of the qualifying round today, including a match between Bahrain’s other representative Hasan Abdulnabi and Great Britain’s Jay Clarke.

The qualified players will then join the 23 already-qualified entrants tomorrow in the main draw to battle for the tournament’s crown.

The semi-finals of the singles and doubles events are scheduled for November 27, while the finals will take place the following day, the concluding day of the championship.

Organised by the Ministry of Interior’s Public Security Sports Association in Bahrain for the second time, this prestigious 10-day event is the largest tennis sporting event hosted by the Kingdom, with world-class players from 27 countries in the fray.

It is being held Under the patronage of His Excellency Lieutenant-General Shaikh Rashid bin Abdullah Al Khalifa, the Minister of Interior.

The tournament is being supervised and observed by International Tennis Federation representative Valery Lutkov of Russia and run by international referee Ashraf Hamouda of Egypt. 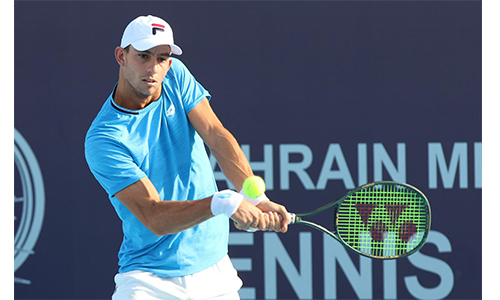