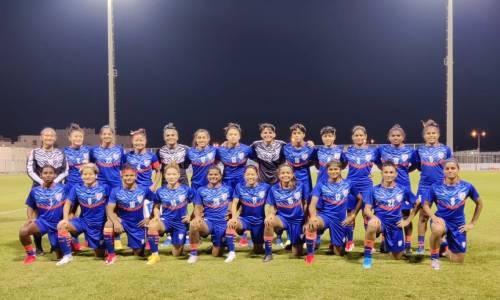 India’s women’s national football team posted a convincing 5-0 victory over their Bahraini counterparts last night in an international friendly match played at the Hamad Town Club pitch. The visitors were dominant in the game, despite playing the last quarter-hour with just 10 ladies. Three of India’s goals came in the first half, with Pyari Xaxa scoring on either side of the interval.

Sangita Basfore gave India the early lead after finding the net in the 13th minute.

Just six minutes later, they doubled their advantage after Pyari Xaxa scored off a pass from Dalima Chhibber.

India’s Indumathi Kathiresan then hit home in the 34th minute to make it 3-0 and give her team the commanding advantage at the break.

The Indians then fired in their last two goals in just a two-minute span early in the second half.

In the 68th, Sanju Yadav headed to Indumathi, who sent a through-ball to Pyari, who hammered home India’s fourth.

Their fifth and final goal came in the very next minute from Manisha Kalyan.

It was a tough loss for Bahrain, who had some chances but could not convert.

They played the friendly as part of their preparations for the qualifying competition for the 2022 AFC Women’s Asian Cup.

The nationals are in Group A of the qualifiers along with Chinese Taipei, Laos and Turkmenistan, and the Kingdom will host the matches from October 18 to 24.

The Indians already have a spot in the Asian Cup as hosts.

The tournament is currently scheduled for January 20 to February 6 in three host cities, including Mumbai, Navi Mumbai and Pune.

India are scheduled to play another friendly against Chinese Taipei on Wednesday.