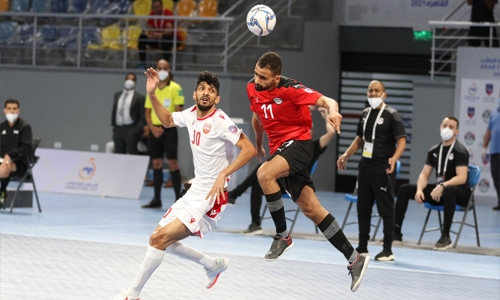 Bahrain suffered a tough 0-1 loss to Egypt yesterday in their final Group A game of the fifth Arab Futsal Cup 2021, currently being played in Cairo. The match’s lone goal was fired in for the home team by Khaled Saeed, and it proved to be enough to separate the two sides in the tightly contested encounter. As the result, the Bahrainis finished second in their group with six points after winning their first two games.

Egypt emerged on top with seven points. Both teams move on to the semi-finals, where Bahrain take on the winners of Group B, which will be decided today. The Egyptians, on the other hand, face the Group B runners-up.

The semi-finals are scheduled to be held on Thursday, to be followed by the bronze and gold medal games on Saturday. Bahrain is making their debut in the tournament this year and are hoping to secure a medal on their very first try. The Arab Futsal Cup last took place in 2008, also in Egypt, when Libya were crowned back-to-back champions, after having also won in 2007.

Egypt won the tournament’s first two editions, held in 1998 and 2005. They also were the runners-up the two previous times.

Italian Super Cup will return to Saudi Arabia next season