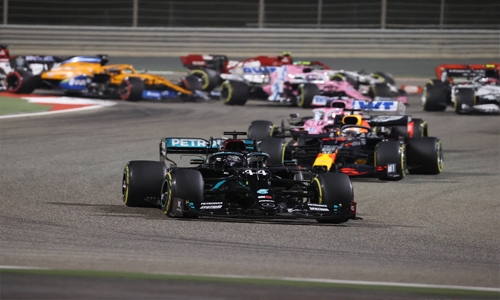 Bahrain International Circuit (BIC) will this weekend host the coronation of this year’s drivers’ and teams’ champions in the FIA Formula 2 Championship, to be held in support of the Formula 1 Rolex Sakhir Grand Prix 2020.

The F2 season’s final round will consist of two races, with crucial points on the line for the title contenders as they battle along BIC’s 3.543-kilometre Outer Circuit.

Prema Racing’s Mick Schumacher, who today was confirmed to be graduating from F2 to an F1 seat with Haas in 2021, leads the drivers’ championship standings heading into the highly anticipated finale. Callum Ilott of Uni-Virtuosi follows as his chief rival just 14 points behind with 191 points.

Nikita Mazepin of Hitech Grand Prix, who has been announced as Schumacher’s teammate at Haas next F1 season, is third with 162 points, while Robert Shwartzman, also of Prema, is fourth with 159 points and Yuki Tsunoda of Carlin fifth with 157 points.

A total of 40 points will be awarded to the winners of the round’s races, with 25 points for first place in Saturday’s 48- lap Feature Race and 15 points going to the victor in the 34- lap Sprint Race on Sunday. Four points are also to be awarded for pole position in Qualifying, and an additional two points from each race will be won for setting the fastest lap.

Felipe Drugovich of MP Motorsport and Shwartzman were the winners in the previous F2 round, held at BIC last weekend in support of the F1 Gulf Air Bahrain Grand Prix.

Prema head into the championship finale in first place on the Teams’ standings with 364 points. Uni-Virtuosi are second with 316.5 points, while Hitech are third on 266 points. Carlin are fourth on 208 and ART Grand Prix fifth with 201 points.

The F2 events at the Rolex Sakhir Grand Prix will begin with Practice tomorrow at 3.05 pm, followed by Qualifying that evening at 6.45 pm. The Feature on Saturday will be at 3.10 pm, while Sunday’s Sprint Race is scheduled for a 3.20 pm start.

Following the weekend’s second race, a prize-giving ceremony will be held in honour of the 2020 champions of both F2 and the FIA Formula 2 Championship. Meanwhile, also supporting Bahrain’s F1 double-header for the second successive week will be the Porsche Sprint Challenge Middle East, which will be staging the second round of its 2020/2021 season.

Jaxon Evans was the double winner in the opening meeting supporting the Gulf Air Bahrain Grand Prix, and he will be looking for a repeat of his success.

The upcoming Porsche meeting will feature two Practice sessions tomorrow at 1.55 pm and 10.25 pm, respectively. Saturday will see Qualifying held at 2 pm, followed by the first 17-lap race at 6.30 pm. The second sprint will be at 4.30 pm on Sunday.

The F1 Rolex Sakhir Grand Prix 2020 this weekend will be taking place with all precautionary guidelines in place issued by the Ministry of Youth and Sports Affairs and the Ministry of Health, as well as those set by the FIA.