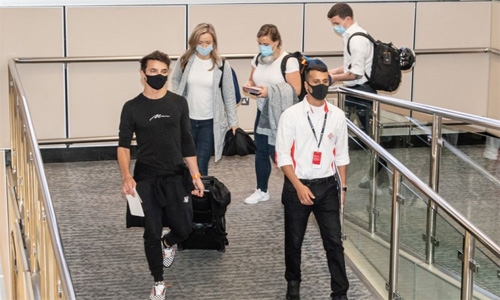 Bahrain International Circuit (BIC), “The Home of Motorsport in the Middle East”, has begun to welcome Formula 1’s star drivers to the Kingdom ahead of this weekend’s F1 Gulf Air Bahrain Grand Prix 2020.

Among those who have already arrived in Bahrain are the McLaren pair of Lando Norris and Carlos Sainz, Williams drivers George Russell and Nicholas Latifi, and Alfa Romeo’s Antonio Giovinazzi.

A number of drivers from the supporting Formula 2 Championship have also already reached the island, along with race officials.

They are being received at Bahrain International Airport by BIC’s Meet and Greet Team, and are being assisted with their arrival formalities at the specially constructed BIC Reception Tent.

More F1 and F2 drivers are scheduled to arrive in the coming days as the countdown continues to the region’s biggest global sporting showcase, which takes Sakhir by storm between Friday and Sunday (Editor’s note: November 27 to 29).

The F1 Gulf Air Bahrain Grand Prix 2020 marks the 15th of 17 rounds in this year’s F1 World Championship. It will be the front-end of the first-ever F1 double-header in the Kingdom.

The Rolex Sakhir Grand Prix takes place the very next weekend from December 4 to 6 at BIC with a completely different track layout, offering the sport’s competitors an all-new challenge and fans an additional spectacle. Both races are being held at night under the brilliance of BIC’s state-of-the-art floodlights.

The Kingdom’s F1 double-header will be taking place with all precautionary guidelines in place issued by the Ministry of Youth and Sports Affairs and the Ministry of Health. Although both events are closed to the general public, frontline health workers and first responders, along with members of their immediate families, have been invited to join.

Porsche Sprint Challenge ME set for season-opening round

Joining F2 as a support series for the Gulf Air Bahrain Grand Prix is the Porsche Sprint Challenge Middle East—the region’s leading one-make championship that is based at BIC.

Launched in 2009, the competition returns for a landmark 11th season. It was created to give the region’s home-grown driving talent an opportunity to realise their potential while enhancing personal circuit experience. It has now established itself as the region’s most popular circuit championship for drivers and fans alike, featuring real racing and genuine rivalries on the track.

This weekend’s meeting will be the first round of the 2020/2021 season, and participants will be battling it out in the powerful and dynamic Porsche 911 GT3 Cup cars.

A highly competitive grid of 17 drivers hailing from all over the world is set to take part. Among them is the Team Bahrain pair of Shaikh Jaber bin Ali Al Khalifa and Shaikh Ali bin Mohammed Al Khalifa. Both Bahrainis will be competing in the championship’s GT3 class, with Shaikh Jaber driving in the Am category and Shaikh Ali racing in the Pro-Am.

The series’ GT4 class features six racers on the grid, including Fawaz Algosaibi, Bandar Alireza and Bandar Alesayi from Saudi Arabia, Leo Willert and Freddy Fast from Austria, and Franz Dziwok from Poland.

This weekend’s action in the Challenge will include two Practice sessions on Friday at 11.25am and 7.55pm, respectively. Qualifying will then be held on Saturday at 11am, setting the starting positions for the round’s first 12-lap race later that afternoon at 3.50pm. Race two will then be held on Sunday at 2.20pm.