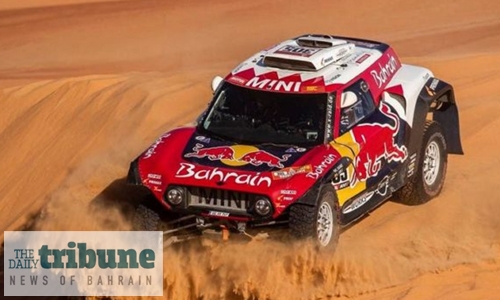 The 2020 Dakar Rally car battle is set to go down to the wire after Stephane Peterhansel and co-driver Paulo Fiuza of Bahrain JCW X-Raid Team won the 11th and penultimate stage yesterday in Saudi Arabia.

Competitors battled it out in the event’s last super-long leg, at 744km, which went from Shubaytah to Haradh with over 379km of it being special.

Peterhansel and Fiuza triumphed in a time of four hours 14 minutes and 11 seconds, just 10 seconds ahead of Nasser Al Attiyah and Matthieu Baumel of Toyota Gazoo Racing. With their classification, they cut down the gap to overall car leader Carlos Sainz, driving the other Bahrain JCW X-Raid car alongside Lucas Cruz.

Two-time winner Sainz had carved out a healthy lead of more than 18 minutes over Al Attiyah and Peterhansel heading into yesterday’s events, but his two main rivals who have 10 Dakar titles between them made sure the inaugural Saudi edition goes undecided until the very last stage. Sainz and Cruz were third on stage 11, just a little over eight minutes behind the winners.

They now have just a 10-minute lead over their two rival cars on the general ranking. Peterhansel, 54, admitted: “We pushed all day long and we gained some time, but not enough. Now, if Carlos can bring it home, it’ll be great for the team.” Sainz, 57, added: “It’s good to have put the marathon stage behind us.

Just one day to go. I’ll keep an eye on the gaps and stay focused for tomorrow.” The 12th and final stage will see the rally head from Haradh onto the home straight, with a relatively modest 447km, and 374km of special stages, to the finish in Qiddiya.