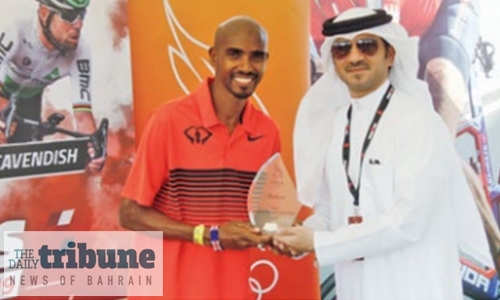 The Legends Team of Mo Farah, Mark Cavendish and Chloe McCardel yesterday praised the remarkable organisation of the Ironman 70.3 Middle East Championship Bahrain, which is scheduled to take place today across the Kingdom. The superstar trio saw the preliminary arrangements of the race for the first time while at The Avenues Bahrain for their pre-event Press conference.

Bahrain Olympic Committee (BOC) secretary general Mohammed Al Nusuf was present at the gathering. He welcomed The Legends Team to Bahrain and praised them for their participation in the Ironman race. Al Nusuf said that Ironman is one of the most important events held annually in Bahrain, and he pointed out that they are a part of the vision and support of Shaikh Nasser bin Hamad Al Khalifa. He wished The Legends Team success as they embark on their respective legs in the Ironman race.

On their parts, Farah said that it is his first time in the Kingdom of Bahrain and he expressed his happiness in participating with The Legends Team alongside Cavendish and McCardel. The Briton added that it is important to enjoy the race and they will work hard to entertain both the participants and the spectators. At the end of the conference, Al Nusuf presented members of The Legends Team commemorative shields from the BOC.

The three iconic sports personalities then met with members of the crowd who were present at The Avenues. This year’s race in Bahrain is the fifth Ironman event in the Middle East and the official Ironman 70.3 Middle East Championship. It continues to delight athletes with its fast and unique courses, including a bike course that takes in part of Bahrain International Circuit (BIC) in Sakhir. It begins with a 1.9km swim that starts at the water in front of the The Avenues.

Athletes follow the rectangular swim layout that leads along a series of right turns and back to the lagoon’s bank before they head into transition. The one-loop 90km bike course consists of a single lap starting from transition at The Avenues Park. Athletes pass the iconic twisted tower in Bahrain Bay and landmarks such as the World Trade Centre and on to BIC and back. The concluding 21.1km run then starts at the The Avenues and leads athletes onto King Faisal Highway in the heart of the city.

Spectators can cheer on the athletes all the way back to the finish line at The Avenues. The Ironman 70.3 Middle East Championship Bahrain also offers 75 qualifying slots for the 2020 Ironman 70.3 World Championship in Taupõ, New Zealand.