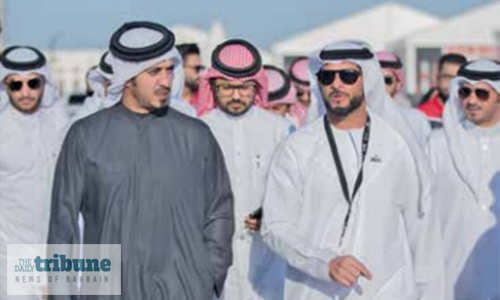 HH Shaikh Khalid bin Hamad Al Khalifa highlighted Bahrain’s position as a key hub for major international and regional events as he attended West Asian Triathlon Championship took place at the Avenues Park in Bahrain Bay. The event, held under the patronage of HH Shaikh Khalid, was organised by the West Asian Federation in collaboration with Bahrain Triathlon Association.

Bahrain is the first country in the GCC region to embrace this event which featured more than 60 participants representing 15 countries including Bahrain, Saudi Arabia, Kuwait, UAE, Oman, Qatar, Iraq, Syria, Lebanon, Jordan and Iran as well as other Asian and European countries. On this occasion, HH Shaikh Khalid bin Hamad Al Khalifa said: “We are happy to have Bahrain hosting this event which is taking place for the first time in this region.

This confirms Bahrain’s capabilities to host any kind of major sports and other events.” The First Deputy Chairman of the Supreme Council for Youth and Sports and President of Bahrain Olympic Committee further added, “We appreciate the role of HH Shaikh Nasser bin Hamad Al Khalifa, Representative of His Majesty the King for Charity Works and Youth Affairs, National Security Advisor and Chairman of the Supreme Council of Youth and Sports in cementing Bahrain’s position as a key hub for major sports events owing to the extraordinary efforts he is exerting towards this,” recalling HH Shaikh Nasser’s incredible achievement in Kona last year which played a leading role in furthering Bahrain’s reputation in sports.

Furthermore, His Highness pointed out that the event coincided with Bahrain’s hosting of the Ironman Middle East Championship 70.3 and this underscores the Kingdom is the home of the triathlon sport in the Middle East.