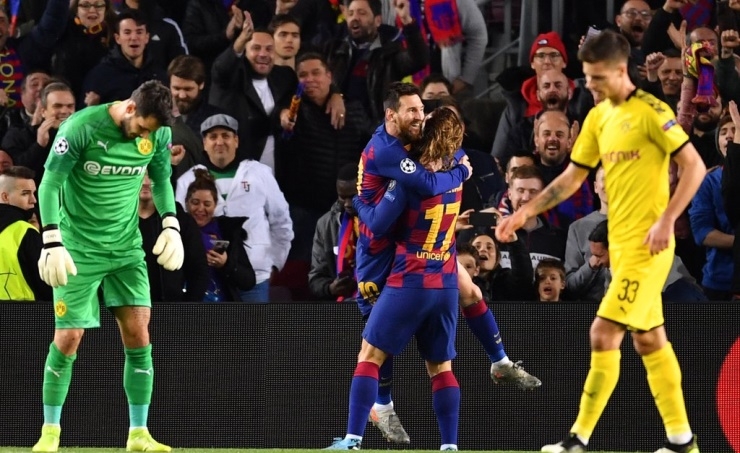 Lionel Messi scored and set up two other goals on his 700th Barcelona appearance to fire his team into the Champions League last 16 on Wednesday with a 3-1 win over Borussia Dortmund.

Ernesto Valverde's side sealed qualification in first place from Group F, while RB Leipzig followed them through with a 2-2 draw with Benfica in Group G, Deutsche press agency (dpa) reported.

Liverpool drew 1-1 against Napoli in Group E, with Dejan Lovren equalizing after Dries Mertens sent the Italian side ahead, leaving the group open in the final round of fixtures.

Ajax moved top of Group H with a 2-0 win over Lille, thanks to strikes from Hakim Ziyech and Quincy Promes, after Chelsea and Valencia tied 2-2 at Mestalla.

Inter Milan beat Slavia Prague 3-1 to move second in the group on head-to-head against Dortmund, with both sides on seven points behind leaders Barcelona on 11.

Emil Forsberg struck twice late on for RB Leipzig to help them reach the Champions League knockout phase for the first time.

Zenit Saint Petersburg moved second in Group G after a 2-0 win over Lyon with goals from Artem Dzyuba and Magomed Ozdoyev.

The Russian side are level on seven points with their French opponents but have a better head-to-head record, behind leaders RB Leipzig on 10.

Salzburg defeated Genk 4-1 in the other group match to stay in contention, knowing they will go through if they beat Liverpool, provided the English team do not score four or more away goals.

Juergen Klopp's side are top on 10 points, followed by Napoli on nine and Salzburg on seven.
Ajax took advantage of Chelsea's thrilling 2-2 draw with Valencia to go top of the group.