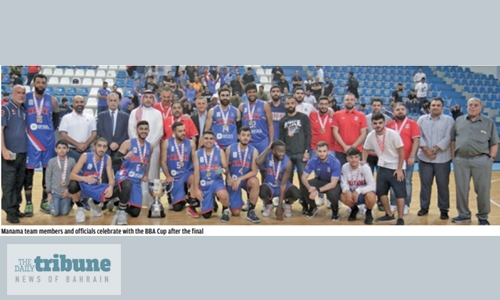 Manama clinched the first-ever Bahrain Basketball Association (BBA) Cup last night following a 95-85 victory over Riffa in the tournament final played at Zain Basketball Arena in Um Al Hassam. The victors had a strong showing in the second half which helped them pull away from their rivals en route to icing the result late in the final period.

Following the game, Manama were presented with the BBA Cup by BBA President Talal Kanoo in the presence of other BBA and Manama Club officials. Team captain Mohammed Hussain received the trophy on the team’s behalf. Hussain and American professional Christopher McKnight combined for 45 points to spearhead the maiden cup holders, who had four other players in double figures. McKnight played all 40 minutes and finished with 23 points while also taking down 13 rebounds and registering three steals.

He also buried three baskets from beyond the arc. Hussain added 22, including 12 from the charity stripe. He also had seven rebounds and nine assists, while also committing eight turnovers. Ali Hussain, Mohammed Jassim, Mohayad Ameer and Hassan Nowrooz chipped in with 12 points apiece. For Riffa, Hassan Helal had 20 to pace his side in the losing effort. Ali Jassim added 18, US import Joseph Jones had 16 points and 17 rebounds, while Younes Kuwayed finished with 14 markers.

Manama took a narrow 22-17 lead at the end of the first quarter, but Riffa were able to narrow the gap to 37-39 heading into the half. Manama then began to stretch their advantage in the third period and they went ahead 66-59 heading into the final canto. There, they enjoyed their biggest lead of 14 points following a lay-up by Ali Hussain that made it 88-74 with under two minutes left.

Both teams had sub-par shooting performances in the contest, with Manama going 30-for-61 and Riffa finishing 26-for-62. They were both dismal from beyond the three-point line, with Manama shooting five-for-20 and Riffa going two-for-21. The result earned Manama their first trophy of the national basketball season.