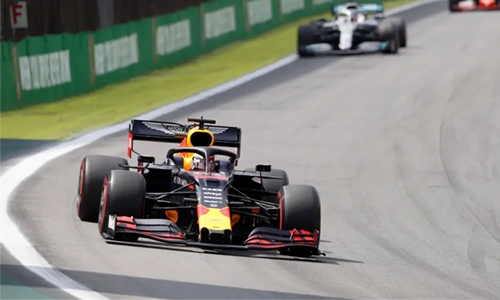 Red Bull driver Max Verstappen has won Form u l a One’s Brazilian Grand Prix for his eighth career victory. The Dutch driver controlled nearly all the race at Interlagos yesterday. Toro Rosso’s Pierre Gasly was second and six-time F1 champion Lewis Hamilton third, though the Mercedes driver is under investigation. Ferrari drivers Sebastian Vettel and Charles Leclerc did not finish after the two crashed near the end of the race.

The Brazilian GP yesterday was the penultimate race of the season. Hamilton had already secured the season title in the previous race in the US. Verstappen converted pole position into victory but had to twice pass Hamilton for the win as an initially strategic grand prix turned into an absolute thriller. Verstappen and Hamilton mirrored each other’s approach before a pair of Safety Car periods late in the race resulted in a dramatic denouement.

One Safety Car period was caused by the Ferrari drivers colliding as they contested fourth position, leaving both out of the race. Amid the drama weekend-long midfield leader Gasly surged into third spot, which became second when the recovering Hamilton clashed with Alexander Albon on the penultimate lap. Hamilton, who accepted blame for a clash that is under investigation, recovered but fell millimetres short of denying second from the excellent Gasly.

Verstappen retained the lead from pole position while Hamilton immediately emerged as his nearest opponent by passing Vettel around the outside of the Senna S. For Gasly it was his maiden podium finish and the second of the year for Toro Rosso. Carlos Sainz Jr. rose from the back of the grid after an engine failure in qualifying to take fourth position, with Alfa Romeo profiting from the melee to claim a season-best fifth and sixth, Kimi Raikkonen ahead of Antonio Giovinazzi.