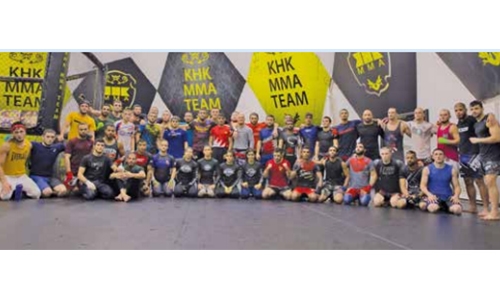 Jarrah Al-Selawe regained his world title at BRAVE Combat Federation with a stunning performance over previously undefeated Abdoul Abdouraguimov, in Abu Dhabi. Now “The Jordanian Lion” has stepped up to help Team Bahrain in the closing stages of preparation for the upcoming IMMAF World Championships, which takes place between November 10th and November 16th, at the Khalifa Sports City Arena, in Isa Town, Bahrain.

Invited by Team Bahrain’s head coach and fellow BRAVE CF champion Eldar Eldarov, Jarrah Al-Selawe has been showing new moves to the amateur athletes and helping with sparring sessions, especially with the heavier athletes, such as Abdulrahman Alhasan, who represents Bahrain in the Middleweight division, and Murtaza Talha Ali, from the Light Heavyweight division.

However, Al-Selawe has also assisted Coach Eldar with other fighters, and has also mixed up with the professional team, which will have two big challenges during BRAVE CF 29, as former IMMAF medalist Hussain Ayyad looks to continue his winning streak against Maris Zaharovs, and “The Pride of Bahrain” Hamza Kooheji will be one of the biggest attractions, with his bout against Nahuel Gandolfi chosen as the co-main event.

Jarrah Al-Selawe is tentatively scheduled to defend his world title against Khamzat Chimaev after the Swede challenged him on the spot after both men won their respective fights at BRAVE CF 27, though no date or official announcement has been given by BRAVE Combat Federation.

Al-Selwady returns to action in Bahrain