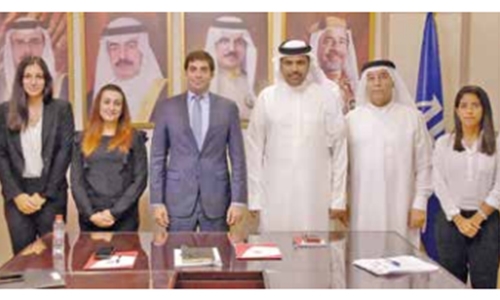 Bahrain is set to host the second edition of the West Asian Football Federation (WAFF) Under-18 Girls’ Championship later this year, the Bahrain Football Association (BFA) announced yesterday. This was confirmed upon the signing of the agreement between the BFA and the WAFF.

The tournament will be held from December 29 to January 6 of next year. Matches will take place at Shaikh Ali bin Mohammed bin Isa Al Khalifa Stadium at Muharraq Club. Seven teams will be competing, including defending champions Jordan, UAE, Lebanon, Iraq, Palestine, Kuwait and hosts Bahrain.

The teams will be divided into two groups for the preliminary stage, at the end of which the top two will move on to the knockout semi-finals. The draw to determine the two groups will be held on November 29 at the WAFF headquarters in Amman. The agreement was signed yesterday by BFA secretary general Ebrahim Al Buainain and WAFF secretary general Khalil Al Salem, in the presence of other BFA and WAFF officials.

As part of their visit to Bahrain, the WAFF delegation also inspected the host stadium, various training grounds and the hotels where the participating teams and officials will be staying.

Al-Selwady returns to action in Bahrain