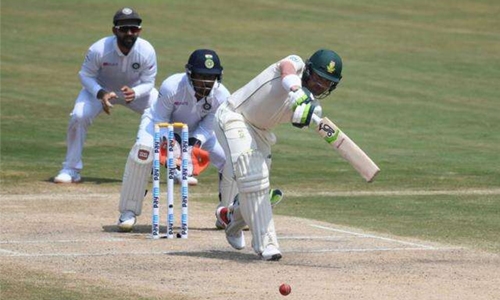 Dean Elgar and Quinton de Kock centuries helped South Africa fight back yesterday to reach 385 for eight in response to India’s mammoth first-innings 502. De Kock made 111 and put on a key 164-run stand with Elgar, who scored 160, to thwart the Indian bowling attack on day three of the first Test in Visakhapatnam.

Off-spinner Ravichandran Ashwin kept chipping away at the batsmen however to claim his 27th five-wicket haul in 66 Tests. At stumps, the Proteas still trail by 117 runs as they chase India’s first innings score of 502 for seven declared. Debutant Senuran Muthusamy, on 12, and Keshav Maharaj, on three, were at the crease after the long day with 98 overs bowled to make for lost time because of storms on day one.

Wicketkeeper-batsman de Kock completed his fifth Test hundred in the final session with a six off Ashwin before eventually being bowled by the off-spinner. Ashwin struck again with the wicket of Vernon Philander for nought. The left-handed Elgar, who started the day on 27, led the revival after South Africa slipped to 63 for four in the morning session.

County credit and no fluke

The 32-year-old credited his stint with Surrey in the English county championship for his impressive show. “I have played five months of county cricket. That’s an extremely big motivating factor for my career that always improves me as a player,” said Elgar. “I’d like to think that this innings didn’t come by fluke, but came because I have done the hard work. I have spent a lot of time away from home which you have got to sacrifice.”

Elgar put on 115 with skipper Faf du Plessis for the fifth wicket to put pressure on India’s bowlers. Ashwin, back in the Indian XI after his last outing in Australia last year, also said playing county cricket for Nottinghamshire had helped him during his time away from the Indian team. “I am elated to be back. It is always special for India. There is nothing like picking up a five wicket haul for your country,” said Ashwin.

“This place is very special for me but I enjoyed a five wicket haul for Nottingham too. One is not too lesser than the other.” Ashwin’s spin partner Ravindra Jadeja also made it count with Elgar’s wicket in the final session as he moved to 200 Test scalps. South Africa started the day on 39-3 but fast bowler Ishant Sharma struck early, taking overnight batsman Temba Bavuma low for 18.

A great march to glory