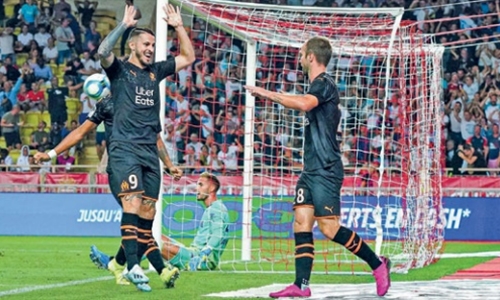 Marseille came back from two goals down to beat winless Monaco 4-3 in a Ligue 1 thriller in the principality on Sunday as close-season signing Dario Benedetto scored twice. Andre Villas-Boas’ side climbed to fourth in the early table after recovering from falling 2-0 behind to Wissam Ben Yedder’s double in the first half an hour. “It’s four goals away from home, it’s good. And with the victories, confidence is coming back,” Dimitri Payet, who scored Marseille’s third goal, told Canal.

Monaco, who only narrowly avoided relegation last term, remain second-bottom with just two points from their opening five matches and have already conceded 14 goals. The pressure is once again mounting on coach Leonardo Jardim, who was sacked early last season before returning after an ill-fated spell in charge from Thierry Henry. Marseille are now only two points adrift of reigning champions and leaders Paris Saint-Germain, and behind Rennes and Nantes on goal difference. “Maybe we’ve dared to play a little more,” added Payet. “In the last quarter of an hour we suffered too.

It’s not always nice to watch, but you have to know how to be efficient.” Monaco grabbed the lead in the 17th minute after Bouna Sarr inadvertently handled a ball over the top towards Islam Slimani, with Ben Yedder stepping up to slam home the penalty and score his second goal for the club since joining from Sevilla.

Ben Yedder wasted little time in netting his third, latching onto Slimani’s perfectly-weighted through ball nine minutes later, before slotting into an empty net after his initial effort was kept out by Marseille goalkeeper Steve Mandanda. But the away team hit back as Argentinian striker Benedetto scored for the third straight game. They were level three minutes before the break, as Valere Germain ended a seven-match goal drought with a back-post diving header.

Monaco’s defensive woes continued and they fell behind just after the hour mark when some sloppy play in midfield allowed Payet to advance and drill an excellent long-range strike into the bottom corner. Benedetto, who signed for Marseille from Boca Juniors last month, piled further misery onto Monaco by powering home his side’s fourth goal midway through the second half.

Keita Balde came off the bench to pull one back for the hosts with 15 minutes to play, and seconds later Mandanda denied Balde and Slimani in quick succession to prevent Monaco from levelling. But Marseille closed out their most impressive victory under Villas-Boas with relative comfort in the final moments. Earlier on Sunday, Christian Gourcuff’s Nantes moved into third as Kalifa Coulibaly’s goal secured a 1-0 win over Reims, while Saint-Etienne came back from two goals down to draw 2-2 with Toulouse.

Neymar scored a spectacular overhead kick in injury time on Saturday to snatch PSG a 1-0 win over Strasbourg, despite being relentlessly booed by his team’s fans at the Parc des Princes after failing to force a close-season return to Barcelona. Benedetto has now scored four goals in five Ligue 1 appearances.